Go Back To All Inlaws and Others Articles

Inlaws and Others
Mary May Larmoyeux
·8 min read

14 Things Your Daughter-in-Law Wants to Tell You

Something happens the moment a bride says, “I do.” Not only does she get a husband, but in most cases, a mother-in-law as well.

Bonds between some daughters- and mothers-in-law are sometimes compared to the close friendship that Ruth and Naomi enjoyed (Ruth 1:16). But far too many women describe this relationship as fragile, tense, and even competitive.

Recently I asked some friends a few simple questions about in-laws. I was amazed by the number of replies I received about mothers-in-law. I also was surprised by the depth of their emotion.

One woman told me about her in-laws’ first visit, more than two decades ago. Her memories are still painful. As a new bride, she served a festive Thanksgiving meal of turkey, chestnut stuffing, canned cranberry sauce … “the whole nine yards.” When the family sat down for dinner, the new bride was quite pleased about how everything had turned out. Until … the topic turned to how many turkey dinners the in-laws had eaten in the last two months and how much better homemade cranberry sauce is than the canned version. Then the mother-in-law asked, “What are these lumpy bits in the stuffing?”

I received a three-page response from another daughter-in-law about an overnight visit from her mother- and sister-in-law. At one point, the mother-in-law was lying on the couch with a migraine as she directed her own daughter to clean the house. The young girl complained that everything was already clean. “I felt like the worst wife and housekeeper in the world,” my friend wrote.

Another woman poured her heart out to me. Although she and her husband have been married for more than three decades, she still feels that, no matter what she does, she will never measure up to the standards of her mother-in-law. “I simply wish that she would accept me for who I am.”

And then I finally read an encouraging response: “My mother-in-law is a gem! She loves Jesus with her whole heart and that is what makes her so valuable. … She is thoughtful and generous.”

From these and other stories, I realized that daughters-in-laws want to say a lot! Here’s a selection from their answers to my question, “What do you wish you could tell your mother-in-law?”

1. Cut the apron strings to your son.

“Know that your input is no longer the primary influence in your son’s life.”

“Understand the leaving and cleaving part of Scripture (Genesis 2:24). Love unconditionally but also understand your correct place in the relationship with your child.”

“Don’t expect your son to do what you want him to do anymore. Expect and encourage him to consult with his wife.”

“Encourage your son to build, develop, and define his marriage role. Don’t fight for position by grasping and grabbing for your son’s time and emotions.  Good mamas want their kids to have good marriages.”

2. Pray for your daughter-in-law.

“Hope and pray that the marriage of your son will be successful. Don’t sit in the background and hope for your daughter-in-law to fail.”

“Rather than question or criticize your daughter-in-law, bring issues to God and pray.”

“Ask God to show you how to love your daughter-in-law as your own daughter.”

3. Talk with your daughter-in-law about hard things.

“If you are a family, act like one. Families fight, they discuss their issues and that’s how they get resolved. This can be done lovingly and constructively. It doesn’t have to be a he said/she said/you said situation. Tiptoeing around the problems and acting like they don’t exist doesn’t help anyone, it only hurts everyone in the long run.”

“Ask your daughter-in-law to let you know if/when you offend her. Remember that Satan wants to destroy your relationship.”

“Make an effort to applaud, praise, and thank your daughter-in-law. Tell her how much you appreciate her positive influence on your son and why you think she’s a good mother.”

5. Only give advice when asked.

“Do not volunteer information unless asked.”

“Be quick to encourage; don’t question, criticize, or give unsolicited advice.”

“Be aware that sometimes a mother-in-law’s desire to be helpful can be heard by the daughter-in-law as a threat or criticism.”

6. Your daughter-in-law may be different from you. Accept her for who she is.

“Realize that your daughter-in-law wasn’t raised the same way you raised your son and maybe doesn’t have the same standards you have. … Try to understand her mindset and the way her family operated.”

“Do not try to change her into who you would like her to be.”

7. Do not put expectations on your daughter-in-law.

“Do not have expectations for visits, phone calls, etc.”

8. Remember that your son has always had faults.

“Your child was not perfect before she married him.”

“You love your son, so does your daughter-in-law. Every change that you see in your son is not her doing.”

9. Accept the goals your son and daughter-in-law have for their lives.

“Be interested in the things your daughter-in-law and her family are doing even though you don’t agree with them (i.e., homeschooling, international travel, etc.).  Show some interest in the things that are most important to them … even if you think they are making wacky decisions.”

“If we don’t do or say things the way you would, just love us anyway.”

“Allow your daughter-in-law to disagree and know that it isn’t something personal.  Don’t be offended if a daughter-in-law does not share your tastes, dreams, and values.”

“Remember that all good relationships take work and a willingness to seek understanding.”

“Do not assume that you know why ‘she said that’ or ‘she did that.’ Particularly if your assumptions tend to assign negative or mean motivations.”

“Ask questions to understand. Don’t tell your daughter-in-law how things should be.”

11. Allow your son and daughter-in-law to make mistakes.

“Respect the decisions of your son and daughter-in-law, even if you don’t agree with them. Know that if their decision is a mistake, it will be a learning opportunity for them.”

“We all mess up sometimes, but your daughter-in-law really does want to get along with you.”

“Look for positives to applaud even though you see room for improvement.”

12. Cultivate a relationship with your daughter-in-law.

“Let her know the qualities you see in her as a person apart from being a wife and mom. … Realize that it takes time for your daughter-in-law to feel like you are a mom to her. Start out as a friend and let the mom role take place over time.”

“Tell your daughter-in-law about decisions you faced as a mother of infants, toddlers, teenagers, young adults, etc.  Talk about more than superficial things.”

“When you call your son, and your daughter-in-law answers the phone, visit with her before asking for your son.”

“Develop a true friendship with your daughter-in-law.”

“Get to know your daughter-in-law for the person God created her to be.  Then, come alongside her to mentor, encourage, and build a relationship so that if/when you need to give loving input or direction, it is not taken as meddling.”

13. Think the best of your daughter-in-law.

“I wish I could tell my mother-in-law that I know that I’m not perfect; I don’t expect her to be perfect; but let’s both try to assume that the other is doing the best she can.  The comment that she may hear that sounds rude to her, or the action that may come across as hurtful (like a missed birthday card) is usually the dumb stumble of an imperfect person (me).  I often feel that every action is interpreted in the worst light as a personal affront against her.”

“If your son and daughter-in-law can’t do something you want them to do, realize that it’s not because they are angry with you or don’t love you … it has nothing to do with you at all.  Do not analyze and try to figure out what you did wrong.”

“Know that your son is in good hands and that your daughter-in-law is grateful for all that you taught him in the earlier years.”

14. Take the initiative to connect with your son and daughter-in-law.

“I wish I could tell my mother-in-law to come visit us more often rather than expecting us to travel during this busy time in our lives.  She and my father-in-law are retired and have nothing else to do. As long as they are healthy and can travel, wouldn’t it make more sense for them to come to us rather than us loading up four busy people who have jobs, school, extracurricular activities, etc.? Come be a part of our lives.”

“Offer to take care of the grandkids so your daughter-in-law can have a day to herself.”

“I wish my mother-in-law would spend more time with the grandkids. I don’t want to always be the one asking. I would love it if she’d call and say, ‘Can I keep the kids on Saturday?’ … I personally want the kids to know their grandparents well.”

Okay, mothers-in-law, there’s the list. What are we going to do about it?

Copyright © 2011 by FamilyLife. All rights reserved. 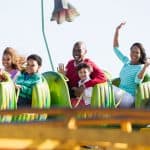 Be a Gentle Servant