Editor’s note: Robertson McQuilkin was the president of Columbia Bible College (now Columbia International University) until 1990, when he retired to take care of his wife, Muriel, who was crippled with Alzheimer’s disease. He said, “The decision was made, in a way, 42 years ago when I promised to care for Muriel ‘in sickness and in health…till death do us part.’ And I’m a man of my word…But [more than that], she has cared for me fully and sacrificially all these years; if I cared for her for the next 40 years I would not be out of her debt.” (Click here to read more about his commitment to Muriel.)

After Muriel died in 2003, Robertson wrote the following e-mail to some friends regarding his thoughts and feelings of her passing, the funeral, and his new life without her.

My sleep was fitful the night of September 19. I didn’t want to sleep, really. I sensed my beloved was leaving me. Her breathing pattern had changed—it was shallower. And that sound…strange…like a coffee percolator.

I rose early, talked to the Lord, then to my journal and checked on Muriel every few minutes. At 8:00, as I shaved, her breathing pattern changed again. Shall I finish shaving before checking? Suddenly I knew—I should not. I dashed to her side, and held her close as she gently gulped once, twice…and was gone.

Between sobs I shouted to our daughter Mardi upstairs to come quickly, and she was soon at our side. Suddenly, Muriel lifted her head ever so slightly, gulped once more and was gone. Mardi said, “Mom came back to tell me goodbye.”

Soon my sisters gathered, weeping with us. Then the hospice nurse came. She called the coroner who resisted her judgment on cause of death: Alzheimer’s. I guess that’s not legit. People die of some complication, not of the disease itself, I’m told. But she insisted. There were no other factors. Muriel was in exquisite health. “I’ve never seen anything like this,” she said. Even Muriel’s skin was beautiful, she noted—not a wrinkle. Of course she could have reported starvation as the cause, I thought, since Muriel finally could no longer swallow. The hospice people had told me that’s a gentle way to die. I had long prayed for a gentle death. Twenty-five years coming, but gentle. Ten years abed, but gentle.

Immediately waves of comfort began to billow around us: friends, phone calls, flowers, food, e-mails, cards, memorial gifts to the Muriel McQuilkin Scholarship Fund. I felt enveloped in love. And before the memorial service all my children and grandchildren had gathered from the ends of the earth. Comfort. For me. For them. If you are one whom I have been unable to thank personally, I want you to know your reaching out was healing balm, and I thank you.

Some said the memorial service was the most glorious they ever attended. Most, I suppose, felt it was the most unusual. For some the highlight was the video of Muriel’s life, for others the reminiscences of the children. Probably most had not experienced a congregation united in a chorus of laughter at a funeral. Our daughter Jan led in that.

I’m writing this high over the Pacific on my way home to an empty house from a week of ministry in Taiwan. I’ve just read a stack of old letters to and from Muriel, letters collected across the years by Mardi. I’ve discovered one of Muriel’s letters where she reported how a young woman she had led to Christ decades ago said that Muriel was gifted in “warai dendo” or “laughter evangelism.” It was Muriel’s happy spirit that had won her over. So we celebrated at her memorial service.

The local TV news, however, didn’t mention the laughter; it quoted our daughter Amy, the one who didn’t know she was on the program till she saw it in print as we processed into Shortess Chapel! In her reminiscences of her mother she told of the pancakes baked on April Fools Day with cardboard filling. I guess the TV reporter felt that captured the essence!

Then there was the wonderful “Friends Chorus” singing “All the Way My Savior Leads Me.” Bill Supplee gathered a choir of Muriel’s friends from his choirs of yesteryear. And, of course, George Murray’s powerful preaching. George and Annette were friends of Muriel from the time of our arrival in Columbia in 1968. If you would like to experience that service, it’s available on video or audio from Columbia International University, the wonderful people who went flat-out to care for us.

And now people ask, “How are you doing?” There seem to be two views on how I should be doing. The day after Muriel’s death, a friend greeted me, “Well, brother, are you rejoicing?” Not exactly. Later that afternoon Mary called. She just sobbed and sobbed, “I’m so sorry; I’m so sorry; I’m so sorry.” That was all. Her tears assuaged my grief.

So should I be grieving my loss or celebrating Muriel’s gain? For a week I struggled with how to honestly answer the question about my inner state, a question I could not answer even to myself. I tried to figure it out, but I’ve never been good at introspection, and besides, my feelings kept churning. Before I could label one emotion, it morphed into another. After a week I asked Amy, still at home from Japan, how I should respond to the questions; after all, these were dear friends who cared … I owed it to them. She said, “Why don’t you just say you’re grieving?” A light went on. That’s it! How am I? I’m full of grief and gratitude.

Grief—for 55 years Muriel was flesh of my flesh, bone of my bone. So it’s like a ripping of my flesh and deeper—my very bones. Some think I must feel relief from the burden. After all, it was 10 years of total care giving. But it doesn’t work that way. One woman I don’t know wrote to comfort me from her own experience of care giving and reported the same response as I, a response which she said surprised her. “There is bonding,” she said, “with the one who is totally dependent on you. It takes love to a deeper level. The pain is greater, not less.” And so it is.

But there is also profound gratitude. For ten years I’ve delighted in recalling happy memories. I still do. No regrets. Grateful.

I once wrote a prayer, “Let me Get Home Before Dark.” It was written in 1981 in a hotel room in Florida, three years into our Alzheimer’s journey. I consciously wrote only one line of it for Muriel, “…will I reach the gate…a mind wandering untethered among light fantasies or grim terrors?” I paused and prayed, “Dear, Lord, for my beloved may it be light fantasies.” How abundantly God answered that prayer. Gratitude.

Now she has emerged from her long dark tunnel into the light of her Savior’s presence. Home at last. As our son Kent said, “Not restored. Better than ever!” So grateful.

Once, after she began to fail, Muriel said, “Honey, I know we can’t be married in heaven, but promise me we’ll be best friends.” I promise.

There was a wish I voiced to the Lord, not exactly a prayer, “It would be wonderful, Father, if I could be with her when she leaves me.” He even hears wishes! She flew away, cradled in my arms. Gratitude.

For years a major prayer was that I outlive her. A few days after her death I had my annual physical exam. The doctor stopped the treadmill abruptly. He consulted his colleague and they obviously were very concerned about the behavior of my heart.

For two hours I waited for the verdict while they consulted with my cardiologist. I said, “Lord, I asked you to let me outlive Muriel, and I’m grateful you heard that prayer. But truth to tell, I didn’t have in mind, ‘by one week’!” Then the report came back. Not to worry. A clean bill of health. Gratitude that I loved to care for her to the end. But for a couple of hours I thought, “My life’s work may now be finished.” And I was okay with that.

So is there life after death? Life for me after Muriel’s death, that is? It seems so, and for that I have Jesus. And YOU. What a gracious gift you are for a time like this. Thank you—gratitude to Jesus, yes, but gratitude to you as well. 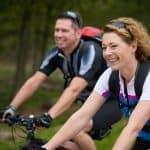 My Mom Is Dating Again

with Ron Deal September 29, 2022
Yes, adult children have thought about their parent dating again, but once it's real, it's just bizarre. Sometimes their roles change. The child becomes the dating coach, telling their parent how to ask for a date and to guard against sexual temptation. E