Intentional Biblical and Gospel-Centered Leadership for the Glory of God

“Now to Him who is able to do far more abundantly than all that we ask or think, according to the power at work within us, to Him be glory in the church and in Christ Jesus throughout all generations, forever and ever. Amen.” —Ephesians 3:20-21

Dennis and Barbara Rainey had no idea what lay before them after committing their lives to Jesus almost 50 years ago as college students. Through their open hands and surrendered hearts, God moved powerfully in their marriage and directed them on a course that would lead to helping other couples and families around the world. As newlyweds and staff members of Cru, God opened their eyes to recognize the need for the fundamental truths of His Word to enter the hearts and homes of couples and families. Through a step of faith in 1976, the Raineys moved to Little Rock, Arkansas, to help launch Cru’s first-ever initiative for pre-marrieds, marrieds and families, then called “The Marriage Preparation and Family Emphasis.” The purpose was to equip staff members who were newly engaged or contemplating marriage. Little did they know, God was designing and writing the story of what would become FamilyLife.

The Raineys were convinced marriage was central to what God was doing on earth, and that He was on the move. These teachings resonated with young staff and eventually led to marriage conferences for couples across the U.S. Nearly 10 years later, after broadening its focus to include families beyond Cru, FamilyLife’s Weekend to Remember® marriage conferences set a record attendance of nearly 3,000 people. Since then, Dennis has spoken at more than 150 Weekend to Remember marriage getaways, and the events have reached approximately 3 million couples around the world. 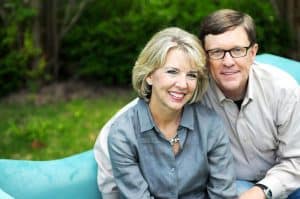 As the conferences began to grow in size and number, the Raineys created a strong team of speakers surrounding them—knowing the ministry could not be sustained by them alone. Believing God wanted to reach even more couples, Dennis and Barbara developed FamilyLife’s first small-group study focusing on real-life marriage issues and practical application. The study expanded into the HomeBuilders Couples Series® (now called The Art of Marriage® Connect series) and has sold more than 3.2 million copies in 49 languages and dialects worldwide.

God continued to stir dreams and desires in the Raineys. By the early 1990s, He began opening doors in mass media to reach even more people in need. Through God’s provision, they launched FamilyLife Today®, a daily Christian radio program, which dramatically increased the reach of the ministry globally. In the first 10 months, the program grew into 50 stations with more than 200,000 weekly listeners, eventually drawing additional ministry partners to FamilyLife.

As the daily host, Dennis was dedicated to making the Scriptures the authority and the Gospel of Jesus Christ the hope of individuals and families. With open and honest candor about their own journey in marriage and family, Dennis and Barbara’s authenticity drew increasing numbers of listeners to the broadcast. Over the last 25 years, FamilyLife Today has received the National Religious Broadcasters Radio Program of the Year Award three times, the first program ever to do so. Today, the show can be heard in all 50 states on more than 1,100 radio stations, reaching an estimated audience of 1.6 million weekly listeners. In its Spanish translation, Vida en Familia Hoy®, it is heard more than 700 times a day across 36 countries.

“I think there are two reasons why listeners have been drawn to FamilyLife Today,” says Bob Lepine, co-host. “First, they have appreciated Dennis and Barbara’s ability to take the solid truth found in the Bible and apply it to marriage and family relationships. And second, they’ve been encouraged by the Raineys’ willingness to be genuine and transparent about their own challenges and struggles.”

It was during an interview on FamilyLife Today that the idea of Resurrection Eggs was birthed. The Raineys have been amazed at how God used a simple tool to share the true meaning of Easter with an estimated 30 million children worldwide during the last 20-plus years. More than 1.5 million sets of Resurrection Eggs have been produced in English, Russian and Spanish.

Through FamilyLife Today and Cru’s ministries around the world, FamilyLife began to expand internationally at a rapid pace. With the full belief that “family is an international language,” the Raineys launched FamilyLife in 109 countries including Canada, South Africa, Kenya, South Korea, New Zealand, Fiji, the Philippines and England.

“Healthy marriages and families are central to advancing God’s Kingdom on earth. Dennis and Barbara Rainey are two of the most significant contributors ever in showing people how to trust God for the wisdom and power to have successful marriages and families,” say Steve Douglass, president of Cru, and his wife, Judy.

As culture began to devalue the sanctity of marriage in the late ’90s, God gave Dennis a vision for an event calling couples to stand up for their marriages. Within a few short years, more than 435,000 people attended the I Still Do® events—leading couples to restate their vows and reengage in their commitment to a healthy marriage. In addition, FamilyLife has strengthened thousands of marriages as couples participated in The Art of Marriage® video event, launched in 2011.

Using personal experiences from their own marriage, the Raineys authored or co-authored more than 49 books and small-group studies, including Barbara’s recent best-seller, Letters to My Daughter: The Art of Being a Wife (Bethany House, 2016).

“When our sons and oldest daughter got married in the late ’90s and 2001, I wanted to share with them some of what God taught me over our years of marriage,” says Barbara. “In response to their invitation, I began writing short emails with some of the most important lessons I’d learned about being a wife, which became this book eight years later. My goal is to help women view their marriage as a work of art, to believe God for what often feels impossible and to expect Him to guide them personally by His Spirit with a beautiful result only He can create.”

Dennis often says, “Courage is doing your duty in the face of fear.” Rather than shrinking from controversy, the cultural attacks on biblical marriage only fortified the Raineys’ mission and calling for people to experience marriage as God designed it. As God used their obedience and sacrifice to reach other couples, He also placed in their hearts the importance of parenting and training children through biblical truths.

“The deeper we got into ministry focused on marriages, the more we recognized the need for resources to help people discover God’s blueprints for every aspect of family life,” says Dennis.

Believing that every woman’s home is an expression of who she is—her values, her faith, her relationships—Barbara launched Ever Thine Home to help women honor Christ in the home and family all year long. Through Ever Thine Home, Barbara created a blog, now with 25,000 subscribers, and dozens of products that have been used in tens of thousands of homes to pass on the truth about Jesus Christ and celebrate the Gospel.

“Everything we do at Ever Thine Home can be summed up in the verses found in Deuteronomy 6:6-9. God said that we need to display His truth “on our door posts” and “on our gates.” So we are trying to create beautiful products that help women communicate their faith at home and to their community. We want to provide unique, creative ways to get children, moms and dads into the Scriptures together,” says Barbara.

This year FamilyLife will release its next video series, FamilyLife’s Art of ParentingTM, which has been a dream of the Raineys for 20 years. It will be accompanied by a book and a full-length movie.

Through their own experiences teaching Sunday school to sixth graders at their church, the Raineys created a resource called Passport2Purity® for parents to teach their pre-teens about surrendering to Jesus Christ, then guiding them to establish healthy boundaries, and to know how to respond to peer pressure and sexual temptation during their teen years.

Barbara’s huge heart for orphans propelled FamilyLife into a partnership to help launch the Christian Alliance for Orphans, which became a global orphan-care movement. Due to the Rainey’s support over the past few years, some 2,500 orphan-care, foster-care and adoption-care advocates from 36 countries have gathered for encouragement and training in orphan care. Though the organization is separate from FamilyLife, it exemplifies their desire to invest in God’s purposes and help others succeed.

The leadership of Dennis and Barbara Rainey has allowed FamilyLife to grow into a dynamic and vital ministry of 400 staff members that offers help for families in more than 109 countries. This year alone, FamilyLife expects to influence more than 60,000 marriages through Weekend to Remember marriage getaways in more than 80 cities nationwide.

“The Raineys have given their hearts, souls and everything they have to pour into the ministry of FamilyLife,” says Scott Beck, former chairman of the board. “Through their sacrifice, millions of families have been changed—and will continue to change—forever.”

Whether through events, radio, books, Bible studies or small-group guides, the Raineys have authentically shared about their own marriage and family challenges while remaining firm in their commitment to a foundation of biblical truth.

“Dennis and Barbara have invested their entire lives into providing resources to help protect and cherish God’s gift of marriage,” says Greg Lillestrand, vice president of Cru, City. “I am inspired by their life of humility and grace, and I believe God has great things in store for them in this new chapter.”

Perhaps the most profound aspect of the Raineys’ leadership is their emphasis on surrendering to Jesus Christ and God’s plan for families. FamilyLife’s history is not a testament to the visions and ambitions of one couple. Instead, the Raineys attribute it to God’s favor and faithfulness on their lives. Through trusting God and believing in His promises, Dennis and Barbara have influenced millions of couples around the world for more than four decades. They leave in their wake a lifetime of dedication, passion and sacrifice, and a network of more than 10,000 couples committed to impacting marriages and families in their communities.

“There is no question the Raineys will be missed, but we are celebrating how God will use them in this new season and we know they have powerfully marked our entire team at FamilyLife,” says Steve Robinson, current chairman of the board.

From the beginning, Dennis and Barbara Rainey knew what God was doing was bigger than they could imagine. By investing in life’s most important relationships—God, spouses and kids—they have full confidence that God will continue to impact generations to come. Soli Deo Gloria.