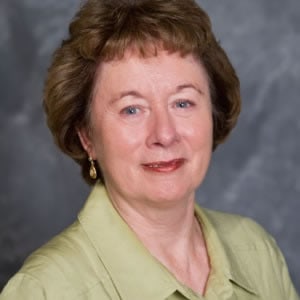 Pat Ennis taught Home Economics for the San Diego Unified School District before developing and establishing the Home Economics Department at Christian Heritage College located in El Cajon, California at the request of Dr. Tim LaHaye. She moved to The Master's College in 1987, at the invitation of Dr. John MacArthur, to establish the Home Economics-Family and Consumer Science Department. Relocation to Southwestern Baptist Theological occurred in 2011. Currently she is the Director of Homemaking Programs and Distinguished Professor at Southwestern.

Pat is the author of Precious in the Sight of God, the Fine Art of Becoming a Godly Woman, co-author, along with Lisa Tatlock, of Becoming a Woman Who Pleases God A Guide to Your Biblical Potential (Moody Publishers), Designing a Lifestyle that Pleases God (Moody Publishers), and Practicing Hospitality, the Joy of Serving Others (Crossway Publishers), as well as a contributing author to Pearl Girls, Experiencing Grit, Encountering Grace (Moody), Think Biblically, Recovering a Christian World View (Crossway Publishers) and Daily Devotions for Writers, (Infinity Publishing.com, 2008. Becoming a Young Woman Who Pleases God, published by New Hope Publishers, was released in 2010. The Christian Homemaker's Handbook, co-authored with Dr. Dorothy Patterson, wife of the President of Southwestern, was released in March 2013. The volume, contracted by Crossway Publishers, is a collaborative effort with 22 key leaders in Women's Ministry. Her professional memberships include the American Association of Family and Consumer Sciences and AWSA (Advanced Writers and Speakers Association).

with Lisa Tatlock, Pat Ennis
It means a lot to the Lord when we practice hospitality. View Show Notes →

What’s the Big Deal About Housekeeping?

Living the Life of the Virtuous Woman

Preparing Your Heart for Home

with Lisa Tatlock, Pat Ennis
Pat Ennis and Lisa Tatlock call women to be all they can be by demonstrating God's love for beauty and order in the home. View Show Notes →