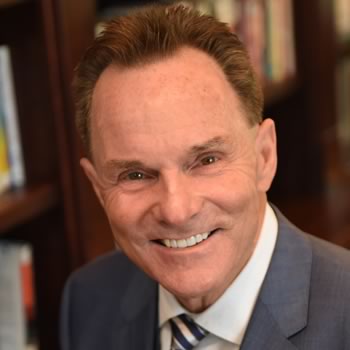 Dr. Ronnie Floyd has been a pastor since he was twenty years of age. His experience, wisdom, and passion for God make him a powerful proclaimer of God’s Word and inspiring leader. Through his preaching and leadership thousands of people here and all over the world are impacted by his message.

Since 1986, Pastor Floyd has served as the Senior Pastor of Cross Church, Northwest Arkansas, a multi-campus church. In June 2016, he completed a two-year elected term as President of the Southern Baptist Convention. Dr. Floyd’s ministry as a local church pastor has been one of commitment to evangelism, discipleship, prayer, and the advancement of the Gospel to America and around the world. As well, he continues to lead in the advancement of racial unity in America and championing spiritual awakening in America. In August 2017 Dr. Floyd was named the President
of the National Day of Prayer. He continues serving as Senior Pastor at Cross Church while fulfilling this great calling on his life.

In 2001, Dr. Floyd founded The Summit, the businesspersons’ luncheon of Northwest Arkansas, a weekly lunch seminar which hosts guest speakers from across the country. Each spring and fall, leaders share their insights on business, leadership, ethics, success, and life principles and values.

Dr. Floyd has been a strategic leader in the Southern Baptist Convention for decades, serving throughout the denomination in keeping with his commitment to invest in others to win the world for Christ. Dr. Floyd served as the first and only General Editor of the relaunch of LifeWay’s Bible Studies for Life curriculum series, assembling the advisory team that breathed fresh life into the most-used Bible study series in the world and consulting on its continued development.

Pastor Floyd has authored 20 books including The Power of Prayer and Fasting, 10 Things Every Minister Needs to Know, Our Last Great Hope: Awakening the Great Commission, and FORWARD: 7 Distinguishing Marks For Future. His most recent book Living Fit: Make Your Life Count By Pursuing A Healthy You will be released in June 2018. In March of 2017, Dr. Floyd began a weekly podcast entitled, Ronnie Floyd on Life and Leadership Today.

He received his bachelor’s degree from Howard Payne University and his master’s and doctoral degrees from Southwestern Baptist Theological Seminary.

Pastor Floyd’s proudest accomplishments stem from his personal life. He and his wife, Jeana, have been married for 40 years. They have two sons, Josh and Nick. Josh
is married to Kate, and they have three sons, Peyton, Parker, and Jack. Nick is married to Meredith, and they have a son, Beckham and three daughters, Reese, Norah and Maya Faith.

Becoming All We Can Be

with Ronnie Floyd
Are you taking care of yourself? Ronnie Floyd tackles the topic of living fit in all areas of our lives: spiritually, physically, relationally, financially, and emotionally. View Show Notes →

with Ronnie Floyd
Pastor Ronnie Floyd, author of "Living Fit," shares five gauges in a person's life that are indicators he or she is living to their fullest. The first gauge is foundational to a person's spiritual life. View Show Notes →

A Call to Pray

with Ronnie Floyd
Dr. Ronnie Floyd reminds listeners that a movement of God is always preceded by prayer. Floyd believes God is calling His church to pray for unity in this country. View Show Notes →