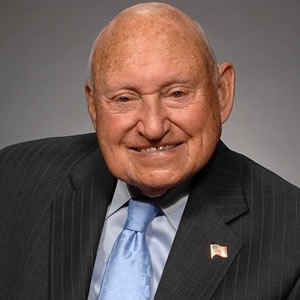 S. Truett Cathy was founder and chairman emeritus of Chick-fil-A, Inc. Cathy started the business in 1946, when he and his brother, Ben, opened an Atlanta diner known as Dwarf Grill (later renamed Dwarf House®). Through the years, that restaurant prospered and led Cathy to further the success of his business. In 1967, Cathy founded and opened the first Chick-fil-A restaurant in Atlanta’s Greenbriar Shopping Center. Today, Chick-fil-A has the highest same-store sales and is the second-largest quick-service chicken restaurant chain in the United States based on annual system-wide sales. Truett Cathy passed away in 2014.

Cathy built his life and business based on hard work, humility and biblical principles. Based on these principles, all of Chick-fil-A's restaurants operate with a "Closed-on-Sunday" policy, without exception.

In addition to presiding over one of the most successful restaurant chains in America, Cathy was a dedicated husband, father, grandfather and great-grandfather. His two sons, Dan and Don ("Bubba"), have both followed their father in learning the business from the ground-up. Dan became president and chief operating officer of Chick-fil-A in August 2001 and Bubba is senior vice president of Chick-fil-A, Inc., president of the Chick-fil-A Dwarf House division and vice president of the WinShape Foundation. Cathy’s daughter, Trudy Cathy White serves as the director of WinShape Girls Camps. In 2006, Cathy welcomed the third generation of Cathy family members to the business. Truett Cathy and his wife, Jeannette, have 12 grandchildren, eleven great-grandchildren (as of February 2012) and more than 150 "foster grandchildren."

with Truett Cathy
On today's broadcast, Chick-fil-A president and founder, Truett Cathy, tells you how you can make a difference in the life of a child. View Show Notes →