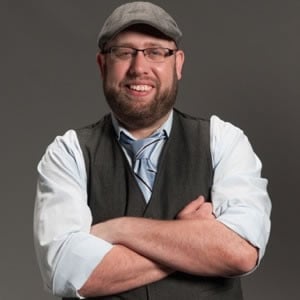 Andy and his brother Jon are a directing team that focuses on creating faith-based and inspirational feature films. The duo began their career when they were teenagers, working as camera operators for ESPN in their hometown of Birmingham, Alabama. They soon embarked on fulltime careers as sports cameramen covering University of Alabama games all over the country. The brothers had the opportunity to work with ESPN College Football Primetime, FOX NFL, and the NBA, and covered events like the X Games and the Super Bowl.

In 2002, the Erwin Brothers started their own production company, venturing into creating commercials, documentaries, and music videos.

In 2010 the Erwin Brothers shifted their focus and began exclusively developing dramatic feature films include: OCTOBER BABY, MOMS’ NIGHT OUT, and WOODLAWN. Slated for a Spring 2018 release, I CAN ONLY IMAGINE is the brothers’ fourth feature film.

with Andy Erwin, Jon Erwin
Directors Jon and Andy Erwin talk about their latest release, "I Still Believe," a movie based on the real-life story of chart-topping singer Jeremy Camp. View Show Notes →

I Can Only Imagine

with Andy Erwin, Kevin Downes
Hear the story behind the hit song "I Can Only Imagine." Director Andy Erwin and Producer Kevin Downes tell the God stories behind the making of the movie. View Show Notes →

with Alex Kendrick, Andy Erwin, K...more
A new wave of cinema is gaining ground in Hollywood. Join us for an insider's view of motion picture business, with Kevin Downs, and Andy Erwin, producer and director of "Mom's Night Out. View Show Notes →

with Andy Erwin, Jon Erwin, Rache...more
Research shows that one-third of American women have had an abortion. View Show Notes →