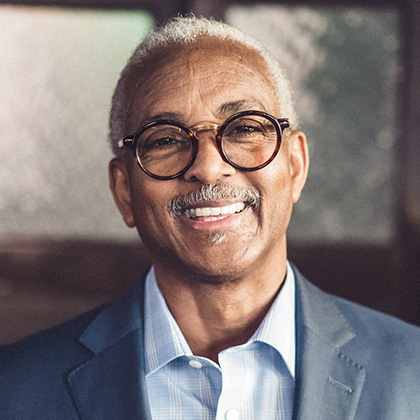 The Reverend Anthony Batiste Thompson is a native of Charleston, S.C. He served six years in the U.S. Navy. He received a Bachelor’s of Arts Degree in Secondary Education from Benedict College, and a Masters of Divinity Degree from Cummins Theological Seminary of Summerville, S.C. in 1995.

After 27 years of service, Thompson retired from the South Carolina Department of Probation, Parole and Pardon Services as an Adult Probation Parole Agent. He also served with the Carolina Youth Development Center of North Charleston, S.C. as a Relief Counselor; the South Carolina Department of Mental Health as a Wraps Provider; Mentor of Charleston as a Direct Service Employee; The Charleston County Substance Abuse Commission as a Court Liaison; John G. Richard’s Institution for Boys as a Youth Counselor, and has mentored young boys in Charleston, Berkeley, and Dorchester Counties of South Carolina as a volunteer for 27 years.

with Anthony Thompson, Kim Anthon...more
Anthony Thompson's wife was one of nine people murdered on June 17, 2015 in Charleston, South Carolina. At the bond hearing, he stood before the killer and said, "I forgive you." What enabled him to say that? View Show Notes →

with Anthony Thompson
Anthony Thompson's wife, Myra, was one of nine victims shot and killed on June 17, 2015 at Emanuel African Methodist Episcopal Church in Charleston, SC. It's only through the gospel that he was able to face his wife's killer with forgiveness and not hatred. View Show Notes →