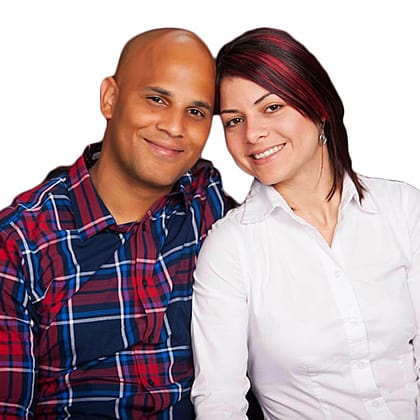 During his fourth deployment, US Marine Corps Sergeant Carlos Evans stepped on an IED–and the loss of both legs and his left hand was just the beginning of the struggle for his life.

For the next two years, he and his wife, Rosemarie, went through the rehabilitation process together. As a nurse and mother of two young children, Rosemarie was used to caring for people, but the task of taking care of her triple-amputee husband brought new challenges every day. In addition to his limb loss, Carlos faced PTSD and developed an addiction to painkillers. He was sure Rosemarie’s life would be better without him–and that it might have been better if he hadn’t survived at all.

But unlike the majority of marriages put under similar strain, Carlos and Rosemarie stayed together. With the help of family, friends, and–most importantly–a strong faith, they’ve built a solid marriage and discovered a ministry they never expected.

with Carlos and Rosemarie Evans
Carlos Evans was on deployment as a Marine when he stepped on an explosive device and suffered life-altering injuries. But through God's grace, Carlos and his wife, Rosemarie, were able to turn tragedy into triumph. View Show Notes →