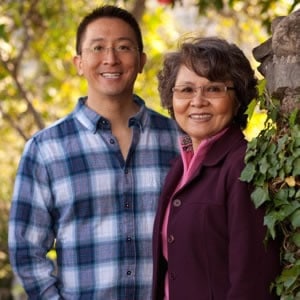 Christopher Yuan and his mother, Angela Yuan, travel nationally and internationally to speak at churches, conferences, youth conventions, and colleges about God’s desire for prodigals of all types to return to him.

Dr. Christopher Yuan teaches the Bible at Moody Bible Institute and his speaking ministry on faith and sexuality has reached five continents. He speaks in conferences (such as The Gospel Coalition, Ethics & Religious Liberty Commission, InterVarsity’s Urbana and the Moody Pastors’ Conferences and Men’s Conference), on college campuses and in churches (such as Saddleback Church and Willow Creek Community Church). He is featured in the award-winning documentary HOPE Positive: Surviving the Sentence of AIDS, and has co-authored with his mother their memoir, Out of a Far Country: A Gay Son’s Journey to God, A Broken Mother’s Search for Hope. Christopher graduated from Moody Bible Institute in 2005, Wheaton College Graduate School in 2007 with a Master of Arts in Biblical Exegesis and received his doctorate of ministry in 2014 from Bethel Seminary.​

Angela is a businesswoman and advocate for Chinese-American cultural causes.

with Christopher Yuan and Angela ...more
Christopher was in jail, busted for selling drugs. Could this be the answer to his mother's prayers? Christopher and his mother, Angela, talk about the way God slowly and patiently drew Christopher to Jesus Christ. View Show Notes →

with Christopher Yuan and Angela ...more
While Christopher Yuan turned to his gay friends and, eventually, drugs for happiness, his mother, Angela, turned to God. She and her husband prayed that God would do whatever it took to bring Christopher to Himself. View Show Notes →

A Gay Son’s Journey to God

with Christopher Yuan and Angela ...more
Christopher Yuan reflects back to when he "came out" to his parents to embrace the gay lifestyle. His mother, Angela, tells how she, in despair, turned to a God she'd only heard about, seeking hope. View Show Notes →

A Gay Son’s Journey to God