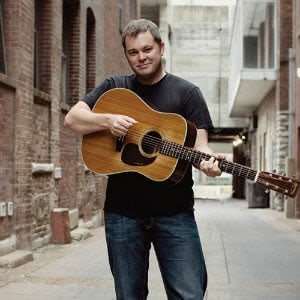 If you were to know one thing about Danny, it’s that he loves the journey. That’s a good thing, because for two decades Danny has played in more than 1,000 different venues around the world– stadiums, arenas, churches, and even a few barns. Mixing his unique storytelling ability with song and guitar, Danny engages audiences of all ages. He has also made a bunch of CD’s, recorded a live DVD, and authored a book.

Danny’s journey began as a pastor’s kid. His dad planted a church in the eastern suburbs of Denver. Each Sunday you could find Danny and his sister, Susie, helping to set up the chairs, taking down the chairs, stacking the chairs, placing the cutout Jesus on and off the flannel graph for the kids in the nursery, and finishing off the leftover grape juice from communion. It was a simple, sincere introduction to a life of ministry and family and one that would shape his music for years to come.

As Danny entered high school in Colorado Springs, his life consisted of sports and music. Basketball and U2 took up the majority of his time. In his senior year, Danny began to gravitate toward the gritty, woody sound of the acoustic guitar. As a freshman in college at Colorado State University, Danny began to lead worship for Campus Crusade for Christ. One night a concert promoter came to their weekly meeting and asked Danny to be an opening act for an artist coming through the region. Danny had never written any songs but naively wrote a few to fill his fifteen minute set. That first gig in a cold theater in Laramie, Wyoming, set in motion Danny’s career as a musician and storyteller.

Over the next few years, Danny’s journey was far reaching, not only geographically, but spiritually as well. One by one, churches, conferences, and festivals began to invite him in to perform music at their events around the country. Danny had found his voice in ministry and song and as an extreme extrovert, was enjoying every mile of the ride!

In February of 2002 tragedy struck as Danny’s wife, Cyndi, died of a heart attack at the age of 30 after a long battle with cancer. Danny was left with two little kids (Grace-4 and Jack-1) and an uncertain future. But it was during this time that God proved his faithfulness and mercy once again as He continued to encourage the family in ways they couldn’t have imagined.

Navpress approached Danny with the idea of sharing his story in a book to encourage others dealing with loss. After nearly a year of writing, Danny finished Mommy Paints the Sky, a story of God’s faithfulness.

Two years later, the journey took yet another turn. Danny was performing in Washington D.C. when he met Rayna, who was working for Compassion International, helping children find sponsors. The two quickly fell in love and were married in 2004. Soon to follow was little Maggie.

These days, Danny continues to perform wherever God opens a door. In talking with him, his laid back demeanor would never lead you to believe that he’s played in 47 states and in 10 countries and that he’s performed for large arenas with thousands of people as well as the back of an old pickup truck, standing on hay bales. But, Danny is very much like the little kid who grew up stacking chairs in church. . .he still loves people and he still loves music.

With his newest recording Just Beyond the Door, Danny celebrates yet another leg in his long and remarkable journey. If you listen closely, you’ll hear a recurring theme: the journey is long and hard, but magical and worth every step.