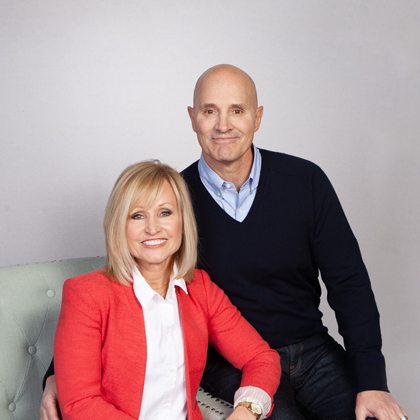 Cofounders of Kensington Church—a national, multicampus church that hosts more than 14,000 visitors every weekend—the Wilsons are the creative force behind DVD teaching series Rock Your Marriage and The Survival Guide To Parenting, as well as authors of the recently released book Vertical Marriage (Zondervan, 2019).

Dave is a graduate of the International School of Theology, where he received a Master of Divinity degree. A Ball State University Hall of Fame quarterback, Dave served the Detroit Lions as chaplain for 33 years. Ann attended the University of Kentucky. She has been active alongside Dave in ministry as a speaker, writer, small-group leader, and mentor to countless wives of professional athletes.

The Wilsons live in the Detroit area. They have three grown sons, CJ, Austin, and Cody, three daughters-in-law, and a growing number of grandchildren.

Why Won’t My Husband Lead?

Getting Closer to God and Each Other

How to Resolve Conflict

with Dave and Ann Wilson
Pastor Dave Wilson and his wife, Ann, talk about marital conflict. The Wilsons admit they had a lot to learn about conflict when they got married. Together they share what they've learned. View Show Notes →

Shut Up and Repent

Does Marriage Get Easier?

Joy in God, Joy in Marriage

with Dave and Ann Wilson
What you believe about God impacts a lot in your life. Dave and Ann Wilson talk about how to have a happy, healthy attitude with a lot of laughter. They teach listeners the four habits for joy in marriage. View Show Notes →

with Dave and Ann Wilson
Sometimes people say the strangest things-and on occasion, they're hurtful. What do you do when the person is your husband? Join us for an insightful and compassionate discussion of this difficult topic. View Show Notes →

The Power of the Tongue

with Dave and Ann Wilson
Words can encourage and give life, or they can destroy and kill. Dave and Ann Wilson tell how they learned this principle the hard way in their marriage and family, on "FamilyLife Today." View Show Notes →

Living in a Leah Marriage