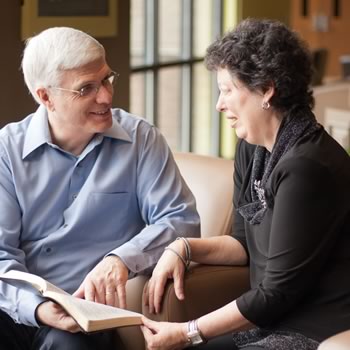 David and Sally Michael are the co-founders of Truth78. Their ministry has been marked by a strong commitment to equipping and partnering with parents and churches in discipling the next generations and developing resources which reflect sound doctrine. Supported by John Piper, their pastor for 33 years and ministry colleague, they developed a philosophy of ministry and discipleship plan for ministry to children. The Michaels now live in Indianapolis where they serve families at College Park Church. They enjoy spending time with their daughter Kristi, daughter Amy and her husband Gary, and three grandchildren.

David Michael is the Pastor for the Next Generations at College Park Church in Indianapolis. David and his wife Sally have labored together in ministry with a strong commitment to casting vision and developing resources for the spiritual development of children in the home and at church. These resources reflect the passion for truth and the theological and doctrinal commitments that has marked the ministry of John Piper who was David and Sally’s pastor and ministry colleague for 33 years. These resources are now being used in hundreds of churches across the country and in various parts of the world through the ministry of Truth 78 (formerly Children Desiring God) which David and Sally co-founded in 1996. They have two adult daughters and three grandchildren.

Sally is a co-founder of Truth78 (formerly Children Desiring God) and has authored curricula and books that are all marked by a passion for developing God-centered resources for the spiritual development of children. For 16 years, Sally served as Minister for Children at Bethlehem Baptist Church in Minneapolis, under the leadership of John Piper and her husband, David. Sally and David, live in Indianapolis where they serve families at College Park Church. They enjoy spending time with their daughter Kristi, daughter Amy and her husband Gary, and three grandchildren.

with David and Sally Michael
Pastor David Michael and his wife, Sally, have a strong passion to see parents discipling their children in the faith. They encourage parents to talk to their children about what God is doing in their lives. View Show Notes →