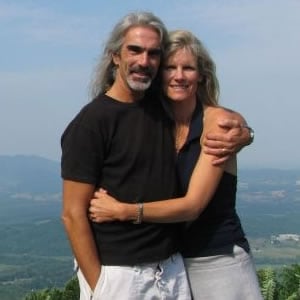 Guy Penrod was born July 2, 1963, in Abilene, Texas. He is a pastor’s kid who spent his growing up years in Texas and New Mexico. When it was time to go off to college, Guy moved to Lynchburg, Virginia, to attend college at Liberty University, where he studied music and vocal performance. In addition to his studies, Guy served as a representative of the University by traveling and singing on the weekends. After four years he had earned not only a Bachelor’s degree, but also a lot of valuable singing and ministry experience.

He met a certain tall, athletic beauty named Angie Clark while attending Liberty University and the couple was married on the evening of Guy’s graduation day. They moved to Atlanta, Georgia, where Guy worked as the music teacher at a Christian school, but after only a year he heard Nashville calling his name.

In Nashville, Guy became a successful studios session singer during the early 1980s, backing up a star-studded line-up of country and gospel music’s best. He eventually became a regular performer on the weekly television program, Music City Tonight until he joined the Gaither Vocal Band in 1994. After stepping in as the Vocal Band’s lead singer, Guy became a defining influence for the group. His larger-than-life presence and powerhouse vocals endeared him to audiences all over the world for more than 13 years.

During those years, Guy and Angie added eight members to their household! Now the parents of seven handsome boys and one beautiful little girl, Guy and Angie spend every possible moment pouring their lives into raising great kids. A cowboy to his core, Guy and his family reside on a farm on Tennessee countryside, where he finds great joy playing and working outdoors whenever possible.

Getting to Know Guy and Angie Penrod