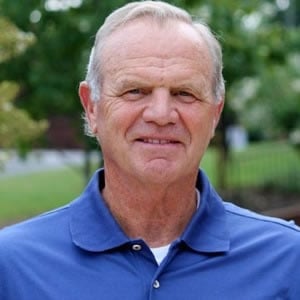 Kenneth Hemphill was born April 17, 1948; in Morganton, North Carolina. His bride of 45 years is Paula Moore of Greenville, South Carolina. Ken is the proud father of three daughters: Kristina, Rachael, and Katherine, and is now the “Papa” of eight grandchildren. After graduating with a Bachelor of Arts degree from Wake Forest University in 1972, Ken later earned three consecutive degrees; a Master of Divinity and Doctor of Ministry degree from Southern Baptist Theological Seminary, and a Doctor of Philosophy Degree from Cambridge University.

Hemphill’s ministry positions have ranged from youth ministry and pastorates to the Director of the Southern Baptist Center of Church Growth, President of Southwestern Baptist Theological Seminary, National Strategist for Empowering Kingdom Growth for the Southern Baptist Convention, and currently the Founding Director of the Church Planting and Revitalization Center of North Greenville University. Dr. Ken Hemphill is the author of 38 books and many articles including: The Prayer of Jesus, The Names of God, EKG: The Heartbeat of God, Eternal Impact, You are Gifted, Live it up, and Velcro Church.  He is also the Founder and President of Auxano Press which publishes non-disposable curricula to assist churches in the revitalization process.

Is Your Teen Walking With Christ?

with Don Whitney, Elyse Fitzpatri...more
Even parents who do everything right to bring their kids to faith have no guarantee it will "stick." Dennis Rainey, Ken Hemphill, Jessica Thompson, Elyse Fitzpatrick and Don Whitney share wisdom learned from experience. View Show Notes →

with Ken Hemphill
Are you helping your children have a kingdom mindset? Ken Hemphill points out the characteristics that set some parents apart as teachers of godliness. View Show Notes →

with Ken Hemphill
Ken Hemphill talks about raising children who are spiritually grounded. Find out what the real key is to raising godly children. View Show Notes →