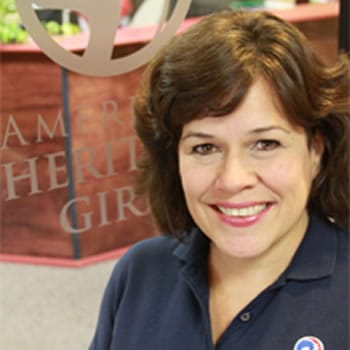 Patti Garibay is founder and Executive Director of the national character development organization, the American Heritage Girls. Educated at the Ohio State University with a major in secondary education and French, Patti shares a love of history and youth.

Patti and her husband Pat, of thirty-six years, are blessed with four grown children, three girls and a boy, five grandsons and two granddaughters. While a stay at home mom, raising her children, Patti served in a variety of capacities as a volunteer. Church, school and scouts were the outlets for Patti’s volunteer service. She served as a Girl Scout volunteer for over twelve years receiving numerous recognitions for outstanding performance as a recruiter and troop leader.

Patti and her four siblings were raised by a disabled father, who lived with MS for forty years before his death in 2004. His encouraging attitude of “Why curse the darkness when you can light a candle?” inspired Patti as she founded the faith-based inter-denominational alternative to the Girl Scouts, the American Heritage Girls in 1995. She served the organization as its first President and Executive Director. She also served as a Unit Leader for AHG for nine years. It is her distinct pleasure to serve as the director of the God-appointed ministry of the 20-year-old American Heritage Girls.

with Patti Garibay
Patti Garibay, national executive director of the faith-based organization, American Heritage Girls, talks about how the organization began and how today it is helping girls. View Show Notes →