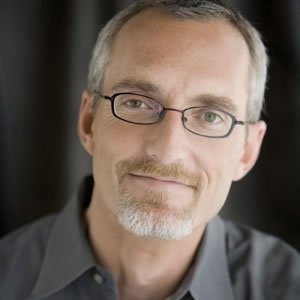 Phil Vischer made his first animated film when he was nine years old; by the age of fourteen, he was convinced he would be a filmmaker when he grew up. After a brief stint at a Bible college, Phil struck out on his own, looking for a way to integrate his faith with his filmmaking. This quest led him to a tomato and a cucumber. The year was 1991, and Phil was a newly married 25 year-old with no financial backing and no idea how his vegetables would ever see the light of day. Today, almost 65 million VeggieTales videos have been purchased and Phil’s faith-filled stories can be found in one-third of all American homes with young children. Although Phil’s original company, Big Idea Productions, collapsed in bankruptcy in 2003, Phil continues his creative involvement with VeggieTales through its current owner.

Phil captured the breathtaking rise—and heartbreaking fall—of Big Idea Productions in the book Me, Myself & Bob, which was published by Thomas Nelson. He is also the author of the popular children’s books Sidney and Norman and 47 Beavers on the Big Blue Sea. He also created the children's series Buck Denver Asks What's in the Bible?.

Phil lives with his wife Lisa (aka Junior Asparagus) and their three adult kids in Wheaton, Illinois. For more information, visit PhilVischer.com.

Explaining Easter and Lent to Kids

Teaching Children to Love the Scriptures

with Phil Vischer
Phil Vischer, VeggieTales creator and author of the Laugh and Learn Bible for Kids, talks to Dave and Ann Wilson about what parents should do, and stop doing, when discipling their children. View Show Notes →

A Simple Word for Kids

with Phil Vischer
VeggieTales creator Phil Vischer relays how the concept of VeggieTales first began and talks about his latest project, the "Laugh and Learn Bible for Kids," a book he hopes will take kids deeper into their faith. View Show Notes →

with Phil Vischer, Sally Lloyd-Jo...more
How does one communicate the significance of the Easter season with children? Sally Lloyd-Jones and Phil Vischer explain how and why to tell the whole Easter story to your kids. View Show Notes →

with Phil Vischer
Have you ever wondered why we celebrate Christmas the way we do? If so, join Phil Vischer as he explores the who, what, where, when, and how of our most popular holiday, Christmas. View Show Notes →

with Phil Vischer
Phil Vischer talks about the meaning behind some of our fondest Christmas traditions. View Show Notes →

Let’s Walk Through the Bible

with Phil Vischer
The Bible, and Bible study, is thought by many to be dry and boring. View Show Notes →