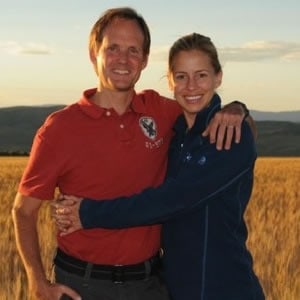 After more than ten years in the broadcast television industry, Sandy Caldwell stepped out of the workplace in order to stay home and raise her son. She realized that many of the same skills and techniques she relied on in the working world were transferable to her new role. She promotes the importance of staying grounded, focused, and motivated as a parent.

Sandy is a full-time wife and mom, and part-time author, speaker, and tennis enthusiast. She lives and writes in the Portland area. Her first book is called What If Parenting Is the Most Important Job in the World?

She has a B.A. in Journalism from Wichita State University and a M.A. in Christian Education from Moody Theological Seminary.

Ken, Sandy’s husband is self-made and has come a long way from the days when he worked his way through college by running his own lawn mowing business. His early career included stints at consumer brand behemoths Pillsbury and PepsiCo. Previously the top marketer for Domino's Pizza, Calwell was the first marketing chief for Wendy's/Arby's Corp. In 2011 he went back to the pizza business when he was named President of Papa Murphy's, the chain that pioneered "take n' bake" pizza. In Jan 2012, Calwell took over as the company's CEO.

with Sandy and Ken Calwell
Ken Calwell, joins his wife, Sandy, to talk about some of the things they wanted to teach their son before he left for college, such as how to handle adversity. Ken recalls his own brush with adversity. View Show Notes →

with Sandy and Ken Calwell
Sandy Calwell decided to stay home with her son instead of pursuing her career as a media executive. Sandy and her husband, Ken, talk about her transition. View Show Notes →

A Meeting, a Marriage, a Mom

with Sandy and Ken Calwell
Sandy Calwell talks about her decision to stay home with her son and invest herself in her family, rather than pursuing the career she loved. Joining her is her supportive husband, Ken. View Show Notes →