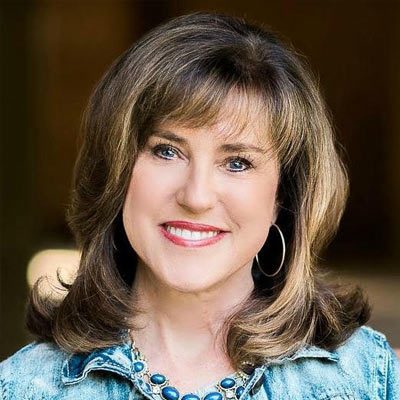 Sharon Jaynes has been encouraging and equipping women through ministry for over twenty-five years. From the time she met Christ as a teenager, she fell in love with God’s Word and has had a passion to bring God’s truth to today’s woman. Through the years, she has taught various Bible Studies, served as a counselor at Charlotte Pregnancy Care, and mentored women from all walks of life. Her mission is to encourage, equip and empower women to walk in courage and confidence as they grasp their true identity as a child of God and a co-heir with Christ.

For ten years Sharon served as Vice President of Proverbs 31 Ministries and co-host for their daily radio feature. She is the author of 16 books with Harvest House Publishers, Waterbrook/Multnomah and Moody Publishers. Some of her titles include The Power of a Woman’s Words, Becoming the Woman of His Dreams, I’m Not Good Enough and Other Lies Women Tell Themselves, and 5 Dreams of Every Woman. She has also written numerous magazine articles and devotions for publications such as Focus on the Family, Extraordinary Women, Decision, Crosswalk.com and In Touch. Sharon is a frequent guest on radio and television programs such as Revive Our Hearts with Nancy Leigh DeMoss, Focus on the Family, FamilyLife Today, and Living the Life with Terry Meeuwsen of the 700 Club.

Besides her own books, she has also been a contributing author in many books such as Chicken Soup for the Sports Fan’s Soul, Stories for the Teens Heart, Stories for the Man’s Heart, and the Women’s Devotional Bible. Her books have been translated into several different languages including Spanish, Portuguese, Polish, and Korean.

Sharon makes her home in North Carolina with her husband, Steve. They have one grown son, Steven

Sharon Jaynes: Your Story, Made Breathtaking

with Sharon Jaynes
How could you heal your story's brokenness so you can share it? Bestselling author Sharon Jaynes talks about how to emerge from shame --toward healing. View Show Notes →

Your Story: The Parts You Wish You Could Change

with Sharon Jaynes
Sharon Jaynes believes the Song of Solomon still has practical applications for us today. For instance, she talks about the "little foxes" that can ruin a marriage if a couple isn't careful. View Show Notes →

Kiss Me, and Kiss Me Again

with Sharon Jaynes
Author Sharon Jaynes dives into the Song of Solomon to teach us about biblical romance. By studying the relationship between Solomon and his Shulamite, we get a picture of God's design for marriage. View Show Notes →

with Nancy DeMoss Wolgemuth, Nanc...more
Are makeup, earrings, and tattoos the mark of real beauty, or is there more? View Show Notes →

with Nancy DeMoss Wolgemuth, Nanc...more
What does it mean to dress modestly, and why should we do so? View Show Notes →

Loving the Body You’re Born With

with Nancy DeMoss Wolgemuth, Nanc...more
How do we learn to appreciate the shape God has given us? View Show Notes →

with Nancy DeMoss Wolgemuth, Nanc...more
Why do women long to be beautiful? View Show Notes →

with Sharon Jaynes
Are you defining yourself by your weaknesses? View Show Notes →

with Sharon Jaynes
Do you often feel inferior to those around you? View Show Notes →