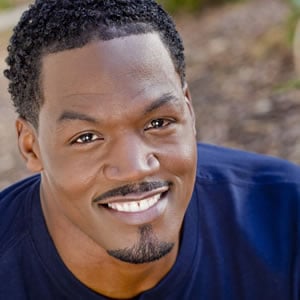 T.C. was born in Cleveland, Ohio. He began performing at a young age in school and church plays. At age 12, T.C.’s passions shifted to the game of football. After stunning football campaigns in both high school (Bedford High/Ohio) and college (University of Louisville/KY), T.C. went on to play professionally in the Arena, Europe, and Canadian leagues.

Following his success in athletics, T.C.’s desires shifted to a career in film and television. T.C. auditioned and immediately landed a spot on “King of the Jungle”, a reality show on the family oriented network “Animal Planet”. He went on to win the show and was rewarded with an opportunity to host a 1-hour special about Koalas on the network. A few years later, T.C. competed in the AMTC (Actors, Models, and Talent for Christ) and was a finalist for Best Overall Male Actor. Following this great achievement, T.C. landed the role of “T.J.” in the hit movie “Courageous”, which was his major motion picture debut. His individual performance grabbed the attention of a veteran agent in Hollywood which ultimately led to T.C.'s relocation to Los Angeles. He landed roles in 3 additional films upon arrival and has also added modeling to his resume, most notably with Russell Athletic.

T.C. regularly travels the country as a speaker and Christian minister and has been licensed in ministry since 2003. T.C. is married to the beautiful Levette Stallings, and has two children.