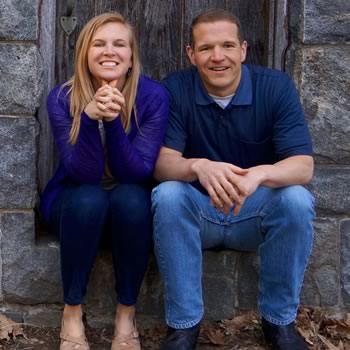 TJ and Jenn Menn have welcomed twenty-two foster children into their home from multiple states across America.  Ages have ranged from newborns through high school, as well as groups of siblings.  They have written a book called Faith to Foster: An All-American Story of Loving the Least of These.

TJ is a 2005 graduate of the United States Military Academy at West Point where he currently serves as an Aviation officer in the United States Army, and teaches Economics in the Social Sciences Department.  He earned a Master’s degree in Public Policy from the John F. Kennedy School of Government at Harvard University. He and Jenn met while they were cadets, and married in December, 2005.

Jenn graduated from Trinity College of the Bible and is a certified member of the Association of Certified Biblical Counselors.  She later received her Master’s degree in Public Administration, also from the Kennedy School at Harvard University.

with TJ and Jenn Menn
TJ and Jenn Menn talk about the benefits and challenges of being foster parents, and remind us that we are close to the heart of God when we care for orphans and widows in their distress. View Show Notes →

with TJ and Jenn Menn
TJ and Jenn Menn never imagined when they signed on to be foster parents shortly after getting married that they would welcome 22 foster children into their home. View Show Notes →