What Does Hollywood Teach Us About Love

Let’s start with a quiz. Name the movie described in the following paragraph:

A man and woman are falling in love, but the woman harbors a dark secret: She is not the person he thinks she is! She realizes she needs to be honest and reveal the truth, but she is frightened. “If he knew who I really am, he wouldn’t love me!” she says. She decides to confess her secret to her beloved, but her deception is revealed prematurely and he pulls away from her in revulsion … only to realize eventually that he loves her no matter who she is or what she has done.

If this sounds to you like the plot from the movie, While You Were Sleeping, you are correct. Of course, you’re also correct if you think this sounds a lot like movies such as, Ever After or Message in a Bottle or Maid in Manhattan or Return to Me or How to Lose a Guy in 10 Days. Switch genders (the man is the one with the secret) and you find that movies like Pillow Talk, and even the Disney animated feature Aladdin used the same plot device. In each case, the moral of the story is, “Be yourself.”

Love and romance are a primary ingredient of many of the films and television shows produced in Hollywood. And if the other lessons we learn about romance in these stories were just as bland as “Be yourself,” we would have little cause for concern. But the film and television industry goes much further.

The next time you watch a favorite movie or television show that includes love as part of its plot, take a close look at how characters in these stories behave, and how they make choices. It does not take long to realize that Hollywood continually promotes some specific views about romance and sex. Should we be surprised that many of these lessons do not reflect a healthy, biblical viewpoint?

Here are just a few of the lessons we learn about love and romance from Hollywood:

“Nothing is more exciting or fulfilling than finding and pursuing your one true love.” This is the basis of countless stories. If you find that special someone, that “soul mate” you think is your perfect fit, you need to heed the call of destiny and do everything in your power to pursue this new love. This is the fantasy we dream of before we’re married; and if marriage doesn’t work out we may revive the dream and continue pursuing that soul mate.

This pursuit of true love approaches the height of silliness in current “reality” shows such as The Bachelor and The Bachelorette. Each week millions of people watch these shows, which promote the fantasy that one can make rational decisions about relationships in the midst of a controlled and contrived competition. We know it’s silly, but we keep on watching.

“A great way to begin a relationship is to have sex.” Increasingly in today’s stories, we find that when two people begin to feel attraction or affection for each other, they begin sleeping with each other almost immediately. I saw this attitude played for laughs in a comedy I recently came across while clicking through channels. A young man expressed his affection for the first time to a classmate, and then blurted out, “Will you have sex with me?” No dating, no holding hands, let’s just get right to it.

“It’s good to wait for sex … at least, until you’re ‘ready.'” This philosophy contradicts my previous paragraph a bit, but it often pops up in the form of parental advice to a teenage child. Rather than exhorting the child to wait until marriage, the parent says something like, “It is a wonderful thing for two people to experience physical love together … but it’s not wise to rush into it. You need to wait until you are mature enough to know what you’re getting into.” The teenager anguishes awhile, and then decides (surprise!), “I think I’m ready!”

“Once you are mature, you should feel free to have sex whenever you want.” Those who believe in waiting until marriage are often portrayed as moralistic, judgmental fools who are wound too tight. This reinforces the belief that it’s unhealthy to “repress” your sexuality. Characters in a television comedy like Friends may have dozens of sexual partners, but are able to live happily ever after when they are married at the end of the show’s run. No regret, no guilt, no disease, no problems!

“It’s impossible to control your sexual desires.” According to this belief, we are helpless prisoners of our fleshly needs. “I didn’t mean to have sex,” a woman says to her friend after sleeping with a man she hardly knew. “It just happened.”

This is only a short list of lessons we learn about love from Hollywood; you could probably add a few “lessons” you’ve noticed from the films and shows you’ve seen. And it’s true that you also can find more positive portrayals of love and romance in films and on television.

But the fact is that Hollywood promotes these ideas over and over. And they influence us more than we care to admit. They help create an image of “fantasy love” that undermines the holiness and commitment necessary to build a solid, godly relationship with your spouse.

You can’t help but wonder how many marriages over the years have ended because people have bought into this “fantasy love” idea without even realizing it. When you see the same values promoted in stories continually over a long period of time, the line between fantasy and reality begins to blur. How often do two people stop pursuing each other after the wedding and look elsewhere because they desperately want to recreate the excitement, fulfillment, and energy of new love?

Hollywood rarely portrays the type of love and romance that we need—real love for real people living real lives. A love where a man and woman start by building a friendship and committing to purity in their physical relationship. A love where they seek God’s direction for their lives together, and when they marry their sexual union reinforces and symbolizes a binding, lifelong commitment to remain man and wife “till death do us part.”

It’s the type of sacrificial, unconditional love so many dream about, but are unable to find. Yet it also is the type of love that we can experience in a marriage empowered by God. And it is what we can model for our children.

Just don’t expect Hollywood to give you much help.

Copyright © 2005 by FamilyLife. All rights reserved.

Why We Need Marriage

When mentees exhausted from wedding prep wonder if marriage is actually necessary, be ready with a few critical truths about its purpose and beauty. 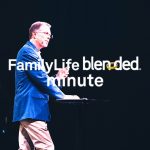 A Line in the Sand

with Ron Deal February 8, 2023
Here’s a dilemma: How do you find permanence in a relationship without making a permanent commitment?