The Divorce Announcement Shouldn’t Have Surprised Me

“When we get back to 1-9-1-5 Martha Drive, we’re done. I’m leaving. We’re through.” My husband growled the unspeakable.

I felt shocked. Angry. Numb. The divorce announcement promising our marriage dissolving sparked fear inside of me.

It would’ve been easier if we could slam the door and walk away to cool down a bit. That way, I could decide if he meant it or not.

The only problem was we were parked on the side of I-40 somewhere in the middle of a 22-hour drive home. I sat crying in the backseat, trying to administer medicine to our 3-month-old who just had her second open-heart surgery five days before.

Not exactly the easiest place to express—or even believe in—our never-ending love for each other.

So I don’t know why the divorce announcement came as a surprise to me. Plenty of people had sufficiently warned us.

Even our daughter’s doctor encouraged us before her birth to consider the impact her health would have on our marriage, too.

“This is the thing marriages crumble under. This type of life: caring for a chronically-ill child. This type of stress: the surgeries, the hospitalizations, the never knowing if she’ll make it,” he said. “I see it every day. You certainly can stick it out. And I hope you do! That’s why I want you to be aware it’s about to get so much more complicated to make it.”

The odds we’d split up

To be fair, we were working against even more odds.

Some we knowingly entered marriage with: two sets of divorced homes. Demanding careers.

Some we inherited that summer: Surprise death of a parent. And now, a chronically-ill second child.

Any textbook prognosis would define our chance of a lifelong marriage as follows: “better sign a good prenup and stay Facebook friends with your high school sweetheart, just in case!”

But does telling people they probably won’t make it mean they’ll start believing they won’t make it? It’s almost like the perceived stats grant the permission to call it quits.

American couples enter marriage with the idea they only have a 50% chance of making it. That divorce statistic has been drilled into our heads since the 1980s.

Why go all in on something that probably won’t work?

But Shaunti Feldhahn says in her book The Good News About Marriage that research proves 72% of all married people are still married to their first spouse.

Too often we sorely under-inform couples of the possibility of marital longevity. Did you know every marriage—even your marriage—has a chance of making it? Of riding out the worst days, when you, too, wonder if your spouse means that divorce threat?

That’s no matter the odds against you. Or the ones that bombarded your life all in one crazy, defeating summer.

What if we could make it?

When we arrived home from that defining road trip, we decided to see a marriage counselor. Our appointment was over lunch. We didn’t want to put too much time and effort into something that was on its way out.

But the lunch with the counselor reset our expectations. He and his wife had experienced significant hardship, too. They had lost a child. They weren’t supposed to make it either.

But guess what? They did. They’re still together. And he told us we could, too. It made us believe it a little bit. Just enough to try to prove which marriage prophecy was right: the divorce announcement or the hope of staying together.

To be honest, the day-to-day in our marriage is hard just like yours might be: messy floors, burnt dinners. And in our marriage, just like maybe in yours, we’ve encountered much bigger challenges than that.

Still, the day we said our vows we both actually hoped it would work. Just like you and your spouse did. Whether you believed you could make it or not, there was something inside each of you that dreamed of forever.

That’s not silly, Disney-movie leftovers from a traumatic childhood. That’s God’s good design for marriage working itself out in you.

In Genesis, God declared that Adam shouldn’t be alone (Genesis 2:18). So He created a gift for Adam in Eve. A partner suited exactly to him. They weren’t told they’d live happily ever after but were called to live faithfully committed to the promises they made.

Discover your personal marriage score for the 5 habits that lead to lasting love.

5 ways we can both beat the odds

1. Focus on your commitment to each other …

2. Take measures to grow together. Find an interest you’re willing to share and make time to share it. Run a marathon together. Join a book club and read the book aloud in your living room together. Find a charity you want to serve at together. Even a pocket of time here or there will cultivate commitment to each other. It will rightly force you to choose time with your spouse over time for yourself or with others who might seem more fun at times but are ultimately less important.

3. Seek counseling as needed. Visiting a therapist to talk things out together does not mean your marriage is in the dumps. It means you’re brave enough to say you don’t want it to go there. Instead of letting recurring arguments fester and settling for divorce announcements, ask for professional input to find workable solutions.

4. Go on regular dates. Regular would mean once a month-ish. Yes, babysitters are expensive. Schedules are busy. The kids cry when you leave. You’d rather take a nap. But it also feels great when your spouse is still committed to the time alone with you. The least you could do is return the favor by being an agreeable date-night participant.

5. Choose each other over your careers. At work, I feel smart, funny, important, well-liked, and recognized for my skills and effort. I don’t know if your home is like mine, but I wouldn’t really list those in the way I feel inside our house every day. No wonder it’s so easy for husbands and wives to feel fulfilled in a role outside the home. The only problem is that role in the workplace could really be done by someone else. Yep, you’re great at it, but absolutely replaceable.

No pressure, but that’s just not true at home. No one else can be the husband or wife to your spouse or the mom or dad to your kids. Prioritizing your home will always be a win. And the more time you spend there, you’ll find the more comfortable and significant you’ll feel there too.

We haven’t quit yet

Though we have threatened to on a few, rare occasions, we haven’t quit on our marriage yet.

We’ve endured more stressing odds against our martial union—our daughter’s health worsening, moving across the country away from our support system to get better care for our chronically-ill child, new house, new job, new school, new life. All alone with just each other.

It’s been difficult. It seems like we’re often arguing about … well, anything. We each deal with the stresses of our life in different ways.

Sometimes that feels overwhelming to me, and I want something dreamier. Softer. More romantic.

Then I realize we’re the couple there together in the post-op waiting room. Side by side. Praying God would heal our child just one more time.

We’re the couple rejoicing in normal, mundane days next to each other at teacher’s conferences and groaning over the same kids’ Chick-fil-A meltdowns.

I guess in the end it hasn’t been as dreamy most days as I’d hoped it’d be.

Yet, we are the couple still living out our dream of love and life together. And I’m glad we’re still making good on those vows of commitment and faith promised, instead of the threats of the odds stacked against us.

Scientists agree that commitment is just one of five habits that directly correlates to marital health. Read about the other habits too.

Tracy Lane is a writer for FamilyLife. She is the author of numerous articles, coauthor of Passport2Identity, and guest on multiple FamilyLife Today® broadcasts. Tracy and her husband, Matt, live in the Philadelphia suburbs with their two daughters. Follow her special needs motherhood journey at HeartForAnnie. Find her on instagram @HeartForAnnie. 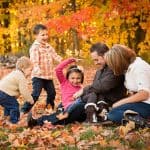