She Was Ready to End Her Life

She searched her home for something she could take to end the pain, instead, she found God’s protection.

With her husband away for the evening, and their children tucked safely in bed, Laveenia Peavy searched throughout the house. She checked every medicine cabinet, every counter for something, anything to do the job. She was ready to end her life.

Laveenia had talked herself in and out of this moment for some time. It felt as if the darkness was swallowing her whole, and she knew what she needed to do. It seemed there was no other way out.

But if she was going to do this, she had to succeed. She couldn’t wake up from this and attempt to explain to everyone what led to this.

I just want to go, she thought.

And no one was there to stop her.

Michael Peavy had prepared himself for a future marriage. He prayed for a wife. He sought wise counsel. Even as a teenager, he sat in during marriage sessions at church. When asked why he was there, he would tell them he just wanted to learn. 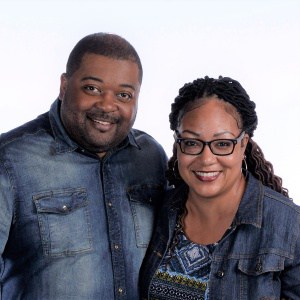 Seeing his own parents’ marriage resurrected after 13 years of separation had a profound effect on Michael and clued him in on what it would take to have a successful marriage—Christ.

So after their wedding in 1998, Michael and his bride happily settled into their roles as husband and wife.

“Life in fairytale land,” Laveenia says. “Everything was going well. We didn’t have a lot to begin with, so we made good with what we had. We were just in a really good space.”

Shortly after their second wedding anniversary, their first child, Carrington, was born. Amidst all the joy a son brings, this is also when darkness began to slowly seep into the fairytale.

“That’s when things started to shift a little bit for me, emotionally,” Laveenia recalls. “Of course, when you have a child it disrupts your world in a positive way. But it can disrupt it in a negative way if you’re not ready and prepared for it.”

Laveenia didn’t realize there was a name for the struggle she was hiding, even from her husband: post-partum depression. Not knowing how to cope with or even understand what was happening, Laveenia hid her emotions behind her “masks.”

“I had tons of masks,” she says. “Who I was around would determine which mask I needed to put on for that moment. It was a family gathering, I’d put on the happy face mask, and everything was good. For the church, I put on the worship mask: God is great, God is good … I had almost a closet of different masks that I would pull from according to the atmosphere I was going to be in that day.”

When the children were still in diapers, Michael, a pastor, worked mostly from home so Laveenia could pursue a career. But no matter how hard he thought he was trying to be a good husband, his relationship with Laveenia wasn’t improving.

“I didn’t know what was happening,” Michael says. “I just knew that I believed God was able, but we were in the storm … We never did really argue, it was just a deafening silence. Then I would say, ‘You know what? Whatever it is, I want to start over.’ And we would be good for another two or three months.”

But these temporary fixes led to their marriage becoming what Laveenia describes as a “roller coaster.”

“We could be good today, terrible tomorrow,” she says. “The silence spoke louder than any argument … The way I was brought up was what happens in the home, stays in the home. You don’t let a lot of people into your situation … so I didn’t look for help. I was just stuck.”

Searching for something to end her life

No one could see the darkness consuming her. She began to be easily irritated by her family. Intimacy and communication between Laveenia and Michael fell to an all-time low, so she threw herself into her work to escape. As her body began to wear out, she relied on energy drinks and caffeine pills to keep her going.

On the nights Michael was attending night school, Laveenia would put the kids to bed early and sit in the dark: no lights, shades tightly close, TV off, just darkness. She did her best to shut out the world and the feelings that came with it.

Then came the night she took it a step farther, searching for something to end her life and take the pain away.

“I had the house really dark and I started to look for something in the house that I could take just to kind of let it all go and give up, pretty much,” she says.

She checked every medicine cabinet, every countertop, and all she could find was baby aspirin. “I honestly believe that was God’s protection, because I was ready to do it.”

While Laveenia was hurting, Michael was praying.

One afternoon, Michael attended a local pastor’s luncheon hosted by FamilyLife volunteers. He had heard about FamilyLife’s Weekend to Remember® marriage getaway on the radio. Though his own marriage was struggling, he wanted to help others. He volunteered to help as an audiovisual technician for local events.

But he also knew his own family was desperate. He received a pastoral scholarship for a Weekend to Remember getaway in Sacramento, and arranged for a relative to watch the kids. Then he told his wife, “We’re going.”

Laveenia was more than reluctant to share a weekend away with Michael. She felt it wouldn’t change anything. But she says a still, small voice kept telling her to go ahead.

And then came the women’s session on Sunday morning at the getaway. “It’s funny how God works. Because up until this point, my heart hadn’t shifted at all.” But as soon as the session started, “I could feel the blinds coming down off my eyes.”

Speaker Julie Boyd proposed a question Laveenia hadn’t thought of: Your husband is a gift. How are you treating this gift God gave you?

“It kind of broke me,” Laveenia says. After the session, she says, she told Michael “I had been misusing him and dishonoring him as my gift.

“I was reluctant to come, but there’s something about this Weekend to Remember. I really believe it was a God thing.”

Not long after the getaway, the Peavys would have a chance to put everything they had learned to good use. Still fighting her depression, Laveenia was angry when Michael left a church picnic to run an errand. This time, Michael refused to just smooth things over. But after their arguing got them nowhere, he took a different approach.

“It was the spirit of the Lord that said, ‘Michael, be quiet. Just shut up,’” he says. “The Lord told me to do something else … to cuddle with my wife that just finished hollering at me.  … And so I did that and I was still silent. Then I said several words that changed the course of our marriage from that point on. I said, ‘Honey, how can I be a better man to you?’”

After nearly 10 minutes of silence, Laveenia began to shake and weep. She told Michael about everything, including the night she tried to end her life. She also told him after she found out about her pregnancy with Jasmine, she had planned to get an abortion.

“It was then that I realized that the enemy was trying to tear apart what God had joined together,” Michael says. “And I tell you, we had a moment of clarity there and the chains were broken and the shackles that were on our marriage began to fall.”

At church the next day, Laveenia helped lead the worship. When the music wrapped up, Laveenia, microphone still in hand, stayed on the platform and began to weep.

With Michael behind her, she shared her struggles with the congregation. Their marriage problems, the isolation and despair. Her depression and her thoughts of suicide and abortion. And where she could have received judgment, she found love and acceptance.

Then she asked anyone who was feeling worthless, that life was not worth living, to join her. As Michael recalls, “People began to pop up all over the building. People began to come to the altar, and we began to pray for people. The altar was full.”

A woman who Michael had noticed earlier stood and walked forward. Holding a piece of paper in her hands, she took the microphone from Laveenia.

“The thing that I’m holding in my hand is a suicide letter,” she said. “I was going to leave it on the deck for my husband. Because I wasn’t going to go home after this …  But God … ”  Through tears, she said she no longer wanted to end her life.

“That was the moment when all of my masks were dropped,” Laveenia says. She and Michael began to understand why they had experienced such struggles. “It wasn’t because of any wrong that we had done, but it was because we needed to experience it so that we could testify of God’s goodness so someone else could be saved through it.”

Praising God through giving back 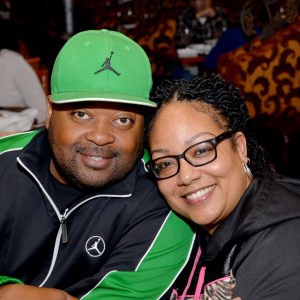 Today, Michael and Laveenia speak of their journey with humor and grace. They now know what a marriage needs, but not because theirs is perfect. They’ll be the first to laugh at that thought.

Through their own journey of sheer heartache and godly restoration, they found a new calling in marriage ministry and started a ministry called Marital Moments.

By sharing their story, Laveenia and Michael offer hope to hurting families. Because they’ve been there. They held on and came out on the other side. They’ve changed their family’s legacy, and know marriage works.

“I say, ‘Information without application is hallucination,’” Michael says. “That’s from James 1:22. Be a doer of the Word … You have to listen and be willing to make the proper adjustments to obey and you will see your marriage turn around. And thank God for ministries like FamilyLife that make it possible to turn marriages around like it did for my wife and I.”