Go Back To All Stepfamily Ministry Articles

Christian stepfamily adults are often caught in a holding pattern around God and His church, unable to touch down in His love.

“Thanks for recognizing that we’re not the church’s dirty little problem.”

“I just never thought I could go back to church again, after the divorce and all.  And to top it off, I went and got remarried.  Everyone at church knows my past and it just feels like we’re considered second class or something.”

John’s statement captures the spiritual struggle of many Christian stepfamily adults.  Some truly feel like they are “the church’s dirty little problem” because of guilt over decisions or actions that contributed to a divorce.  Others are treated as though they live in a “less than whole” family situation” by those who have not experienced divorce themselves.

The result? Too often an overwhelming feeling of unworthiness. One that creates spiritual barriers that distance remarried couples and stepfamilies from God’s healing power.

Christian stepfamily adults are often caught in a holding pattern around God and His church, unable to touch down in His love. Is it any wonder that ministry in a local church can be so challenging?

I responded to John’s sense of spiritual guilt and shame by suggesting that even though he didn’t live in an “ideal” family configuration, he wasn’t a second-class Christian in God’s kingdom.  In our own way, each of us has fallen short of God’s glory, and each of us needs His grace.  God’s plan of one man and one woman in marriage for life does bring greater harmony to the home, but living in an intact family does not determine worth in God’s eyes, nor ability to receive God’s forgiveness.

I reminded John that many characters of the Bible were men of great faith but had families that were far less than ideal. For example, look at Abraham. He lied on two occasions, saying Sarah wasn’t his wife.  He was afraid for his life so he publicly disowned her.  Now that’s not behavior you’ll find encouraged in your local men’s ministry.

As women living in a multiple-marriage household, Sarah and Hagar fought over which of their sons would be the most important in Abraham’s family.  Much like a modern-day stepfamily, there was jealousy, bitter rivalries, and loyalty conflicts between Abraham and his two wives (see Genesis 16 and 21).  And the problems didn’t stop with his generation.

If we analyze the families of Abraham, Isaac, and Jacob, we see power struggles, family secrets, exploitive and coercive relationships. The dysfunction continues to mushroom through the family of David. His family history included a premeditated murder to cover an affair, an out-of-wedlock pregnancy, a son who replicates his father’s disgrace by raping his half sister, and a brother who avenges her humiliation by murdering his brother.

I pointed out to John that God loves stepfamilies and the individuals who live in them, too. You can have a less-than-ideal family and still be acceptable to God.

Forgiveness and redemption for all

Stepfamilies and church leaders alike need to understand this critical message: There are no second-class citizens in God’s kingdom simply because there are no first class citizens.  We’re all just sinners in need of a Savior.  If God could use imperfect men like Abraham and David with complicated family households for His purposes, why can’t He use people in stepfamilies? If God can bring redemption to the houses of Isaac and Jacob, can’t He bring redemption to yours?

The exciting message of the cross is this: God loves and forgives the imperfect people in stepfamilies just like He does the imperfect people in biologically intact families.  He is ready, willing, and able to welcome stepfamilies into righteousness.  The only question is: Will you step up to receive his forgiveness?  Will you step up to renew your relationship with Him or remain paralyzed by your guilt and shame?

His door is always open … step on in.

Pastors, here’s how your church can communicate grace and redemption:

Messages to avoid (they inadvertently communicate a “second class” perspective toward stepfamilies):

If you’re worried being a bad example to your children:

Not all stepfamilies are the result of sinful behavior of the adults, but frankly some are.  If you or your ex’s life choices have not been the best model for your children, try the following: 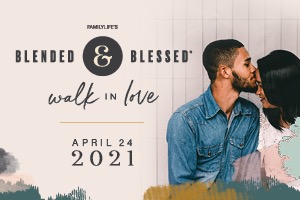