Go Back To All Stepparenting Skills Articles

Steve and Janet were constantly conflicted by their different parenting styles. Janet was often frustrated at how Steve handled discipline with the kids. She felt he was too lenient on his sons, ages 11 and 13, and had unfair rules for her daughter, who was 8. Janet often tried to make up for that perceived gap by stepping in more authoritatively with Steve’s sons.

Steve believed Janet’s daughter should have more regulations and that Janet coddled her. He got angry when Janet scolded his sons, because he felt she was undermining his parenting. Many family evenings were ruined by their arguments over the children’s behavior. Both had dug their heals in and reached a stalemate. The only hope they saw was to get professional advice.

This scenario is common among not only blended families, but nuclear families as well. It is extremely rare for a couple to meet, fall in love, marry, and parent their children the exact same way. It is even more uncommon to have that scenario unfold between two people who each bring their own kids into the relationship. However, it is a belief both blended and nuclear couples hold tightly to: Parents should be a “united front” with their children.

Couples often blend their families with the idealized notion that their parenting styles are similar. When dating, people often present themselves with mirroring views to the partner they want to pursue. This is an innately human, automatic response to avoid rejection and attract the mate they desire. It is rarely a true intention to deceive.

Alternately, some couples realize their parenting philosophies differ but minimize the problems this will present in marriage. Divorced singles seeking a new spouse are often focused on avoiding qualities that culminated into the destruction of their previous marriage. Often, what seem to be minor parenting differences feel like small hurdles to overcome compared to what they’ve experienced in past relationships. Then it often surprises couples when those “minor differences” cause a big rift in their new marriage.

Steve and Janet faced this very problem. They went into marriage thinking their parenting styles were similar, only to find their philosophies conflicted more than expected. They believed in order for their marriage to work they needed to be a united front in their parenting.

But what does a “united front” really mean?

What it means to present a “united front”

Couples frequently believe that to be a united front their parenting ideas have to completely align. They must both respond to each child in the same way, with the same tone, and dole out the same consequences for each level of misbehavior. As previously noted, this is a marriage ideal that will rarely, if ever, be achieved. This notion sets couples up for a marriage filled with disagreement, resentment, turmoil, and overall utter disappointment.

Many couples in my office are in a state of despair and implore me to help them get their spouse to agree with them on how to parent. But this belief requires you to change each other. That never works. In fact, the more you try to change someone, the worse things will get in your relationship.

Contrary to popular belief, a united front does not mean a husband and wife need to seem like one person to their children. Instead, it means they support each other in their differing parenting efforts. They show their children they back each other up, whether they agree with how something was handled or not. If an agreement needs to be reached, they discuss it privately, away from the kids.

Some may be reading this and think, “But we are complete polar opposites in our parenting styles. How can we back each other up when one is totally lenient, and one is too strict?”

It’s true that it would be ideal for each parent to bend a little toward one another. If both are willing to adjust their parenting style to come to more of a middle ground, certainly their family life would be much easier. In this case, it would be beneficial to learn a new parenting philosophy together, where you both can agree on some new tools. Simply compromising on how certain parenting situations will be handled will certainly be a healthy change. In a true compromise, each person will choose to change their own self as a parent.

Very often, however, one or both spouses are unwilling to compromise or change. This threatens blended family marriages. When your spouse will not change, what can be done? Or what if they did change, but it’s still not enough?

Here is the real challenge for blended-family parents: Can you manage your own discomfort when your husband or wife is parenting in a different way than you? Can you trust your children to adapt to two different parenting styles?

Find more like this in our online course just for blended marriages!

Children have an adaptive nature

I don’t know about you, but growing up, I always knew my dad responded to me in different ways than my mom did when I misbehaved. I knew my teacher gave me different consequences and rewards, and the principal would be much more punitive if I were called to his or her office. In my God-given resilience as a child, I learned to adapt and respond to different discipline techniques without being emotionally scarred or feeling confused about the world.

In fact, this strengthened my emotional capacity and helped better prepare me for the real world. I learned not to expect the same treatment from everyone, in every situation. I learned how to deal with different types of people. Even with different discipline methods imposed on me, I still learned the universal truths of right and wrong. This is not because I was an exceptional kid; this is the adaptive nature children are born with in order to one day thrive in their adult lives.

Children can learn to manage differing dynamics with parental figures. If a couple cannot agree on parenting styles, they can agree to allow each to continue to be the parent they want to be. (That is, unless a parent is harming the children, physically, verbally, or emotionally.) They can learn to let each other be responsible for their own relationships with the children and learn to trust their children will be able to navigate those relationships.

In order for a complex blended family to be successful in this process, there may need to be a division of parenting roles, especially in the early years of marriage. For the sake of the growth of stepparent-stepchild relationships, dad and mom might only discipline their own biological children until trust is built and authority can be received by stepchildren. This can take months, and often with older kids, several years. Sometimes, in reality, that threshold is never crossed.

Even so, stepparents have an opportunity here to develop a unique and special bond with their stepchildren. If they focus foremost on doing their part to build a good relationship with their stepkids before moving into an authoritative role, they may be pleasantly surprised the children trust and respect them enough to respond to them more.

Growing to be the parent you want to be

Steve and Janet were able to learn ways to manage their frustrations with each other over different parenting styles. They agreed to step back from parenting each other’s kids and worked to rebuild a foundation of friendship with their stepkids. They intentionally worked to be a united front by supporting each other and backing each other up in their discipline. Steve and Janet felt more peace in their marriage, because they were no longer arguing about parenting. It felt liberating to no longer worry so much about how the other was dealing with their own kids.

Over the weeks, they each noticed their stepkids drawing closer to them. As an added bonus, when they gave each other freedom to parent in their own way, they noticed their spouse working to become a better parent. Without having someone criticizing and fussing over their parenting, they could better hear feedback on how to improve and grow to be the parent they wanted to be. Over time, Steve and Janet were able to gradually earn the love and respect that allowed them to move into more authoritative roles in their stepkids’ lives.

And most importantly, their marriage thrived.

Jessica Patterson is a Licensed Professional Counselor at New Life Counseling Center in Round Rock, TX. With 11 years of experience in private practice, she specializes with marriage and blended families.

Jessica has experienced a divorce and was a single mother to her daughter for 3 years. She remarried in March of 2018 to her husband, Jonathan, and also gained a precious stepdaughter. Their two little girls are now 6 and 7 years old, and they enjoy being stepsisters. Their happily blended family also recently added a new “ours” baby boy in January 2020.

Adolescence is a natural time of turmoil in nearly every family. 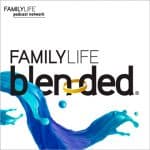