No Borders for HomeBuilders

Several months before we attended a Weekend to Remember® marriage conference, we received some terrible news. Gary’s best friend (who, like Gary, is in the Air Force) discovered that his wife had cheated on him while he was away for training. He was a strong Christian, and we had thought she was, too.

Gary’s best friend and his wife, who had been role models for us early in our marriage, eventually divorced. This was not only devastating to them, but also to us. It caused us to realize that no marriage is safe from divorce. It also put a desire in our hearts to help other couples have strong marriages.

So by the time we attended the Weekend to Remember conference in Tucson, AZ, in June 2006, we wanted to help other couples have strong marriages. At the conference we stopped at a Military Marriage Ministry booth manned by Mike and Linda Montgomery. They introduced us to the four-week military study, Defending the Military Marriage  (in the HomeBuilders Couples Series®, FamilyLife’s small-group Bible studies). Wanting to help protect our own marriage while helping other couples, we decided to begin a HomeBuilders group on our military base.

When we made that decision we had no idea how God would work through us to touch couples around the world.

We returned to our base in Tucson and began leading a group of seven couples through Defending the Military Marriage. Only three of the couples attended church regularly.

We were thankful to not only be able to talk about Christianity in a non-threatening environment, but also to be a part of God’s work in each of those marriages. We saw couples begin to share openly because they cared for their own marriages, and also for the other marriages in the group. We noticed that each couple seemed to grow closer to their spouses and that they developed ongoing friendships with other couples in the group. 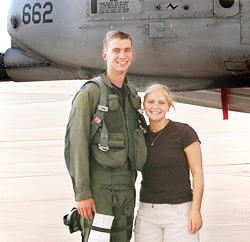 We are also grateful that HomeBuilders has helped us be proactive in our own marriage—we did not want to be a statistic like Gary’s best friend. And we’ve learned not to get our feelings hurt or have negative responses when we share honestly with one another. We now have an atmosphere in our marriage where we are comfortable sharing our frustrations, remembering that God should be our focus.

In October 2006 we moved to South Korea, and so did our HomeBuilders ministry. We were fortunate to join an existing network of HomeBuilders leaders there. We’ve led or co-led several studies in the HomeBuilders Couples Series, but Defending the Military Marriage remains our favorite study since it has really fit in well with our peers. 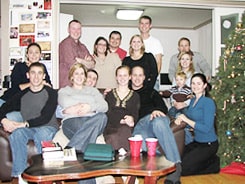 The Moores took their HomeBuilders ministry with them to South Korea

After two years in South Korea, we will soon leave for Germany where we hope to continue HomeBuilders. These studies have helped us remind ourselves and others about important marriage concepts. We’ve also formed valuable relationships; the friends we’ve made through HomeBuilders have been wonderful, especially when we’re thousands of miles away from our families.

Gary’s best friend’s divorce made us realize how precious marriage is … and fragile. It’s so easy to take your marriage for granted. That’s why we have tried to take every opportunity to work on our marriage and to help other couples do the same.

As we’ve gone through HomeBuilders studies with those in the military, we’ve discovered that we are not only protecting our country together, but we are also protecting our marriages.

Used with permission. Copyright © 2008 by FamilyLife. All rights reserved.

Before Marriage and After

with January 30, 2023
Ron, if it weren't for the stepfamily, we'd be a happily married couple.