Never Too Late to Ask for Help

Once a fighter pilot in the Vietnam War, Darrel’s hands tightened around his wife’s neck. She started to choke.

“Wake up!” she gasped, tugging at his arms …

It wasn’t the first time that Darrel’s nightmares had become Evie’s. While fighting imaginary wartime enemies, he had actually kicked her out of their bed several times. She had the bruises to prove it.

Despite the ongoing anxiety and flashbacks, Darrel could not grasp the fact that he needed help. That’s because he told himself that war dreams just happen. “Frankly, I didn’t think I had a problem,” he says. But Evie did not agree.

The recurring nightmares became just the first of many problems that developed in the Couches’ relationship. “We did not have a peaches and cream or bed of roses marriage,” Darrel says. But just like the haunting dreams, he thought, Is that so unusual? Marriage troubles were common in many of the marriages he and Evie had seen modeled.

Finally, 38 years after Darrel returned from Vietnam, Evie had enough. “If you don’t get some help,” she said, “I’m leaving.”

Darrel joined the Air Force right after he graduated from high school and planned to make the military his career. After three years, he applied for Aviation Cadets and became an officer and a pilot.

Before Evie and Darrel married, she thought being the wife of a pilot would be exciting. She imagined them traveling together around the world. But instead of adventure, with each deployment came separation and heartache.

Evie says the worst day of her life was when she held her 3-month-old son and watched Darrel taxi to the runway and takeoff for a one-year combat tour in Vietnam. She wondered if he would ever come back. In September of 1967 Darrel did come back, but not as the man she married. His plane was shot down and he sustained injuries that eventually led to the end of his flying career.

For the next three decades Darrel was a civilian safety and loss control consultant. Regular attendees at church, the Couches looked like they had their life all together. But that was just a façade.

Darrel’s job required him to travel all over the United States. He often left home at 5 a.m. on Monday and wouldn’t return until the following Thursday evening. And Evie? She kept herself busy with raising their two sons and being a leader in a Bible study for women.

He admitted that he needed help

They frequently argued over whether Darrel needed medication for his nightmares. And although Darrel was no longer flying, he never lost what Evie called his first love. She regularly accused him of caring more for flying than her. “The airplane came before I did,” she says.

Darrel and Evie were living isolated lives. And then, at the least expected moment, there was hope of rescue. The first sign of it appeared soon after their lowest point—that night when Darrel had tried to choke Evie during a nightmare.

Evie told Darrel, “I can’t take this anymore,” and he knew she meant it. Now 38 years after Darrel had returned home from war, he was ready to face reality and take the painful steps to change.

The Couches turned to a psychologist friend at church. Through his help, Darrel accepted the fact that his terrible dreams were a result of post traumatic stress disorder (PTSD).

Darrel got the medication and counseling he needed. And as he began to deal with the PTSD, his relationship with Evie began to improve. But the years of turmoil had taken a toll on their marriage.

In 2010 Evie heard an announcement at church about an upcoming FamilyLife Weekend to Remember® marriage getaway. Married for 48 years at that point, she asked Darrel if they could go. He had only one question, “What could I possibly learn at the Weekend to Remember that I don’t already know?”

The Couches had known about FamilyLife’s marriage getaways for 20 years. They even financially supported two couples on its missionary staff. “We knew they brought marriages back together,” Evie says. “But we had never gone to a Weekend to Remember.”

A lot to learn 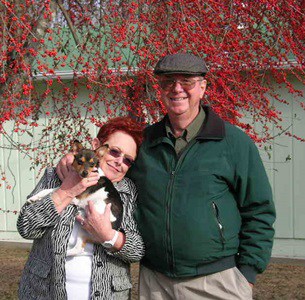 At Evie’s urging, five years after facing his PTSD, Darrel reluctantly agreed to give the Weekend to Remember
a try … as observers. But it didn’t take long to realize there was a lot he and Evie could still learn about their marriage. “I found out we did not know as much as we thought we did,” he says. “We were not doing all that we could. … We were two people living together … sometimes good, other times bad … and a lot of times indifferent.”

A turning point during the getaway came when Darrel gave his wife a love letter he had written as part of a couple’s project. In it he said, “It provides comfort just knowing you are there. We don’t have to talk; we can drive down the road for an hour and never say a word. But it feels good to be together.”

These words reminded Evie that her husband did love her deeply. He really did care. Maybe she was more important to him than airplanes.

As the Weekend to Remember speakers talked about communication in marriage, Evie recognized some things that she had been doing wrong for years. She often disrespected Darrel as she threw verbal darts at him through thoughtless words. She vowed to stop.

And Darrel says he learned to be willing to die to his own desires and to consider the consequences of his words. Now, he asks himself if what he wants to say to Evie could make her cry or result in a miserable day. If the answer is “yes,” then he doesn’t say it.

But the biggest change for the Couches was in their spiritual connection. Although they went to church and even taught Sunday school and Bible classes, they had not really invited God into their marriage. For the first time they understood what it meant to have God at the center of their union. They learned that the closer they each drew to Jesus Christ and followed His teachings, the closer they would be to one another. And for the first time, they started to pray together.

At the last session of the marriage getaway, the speaker invited the couples to stand and repeat their wedding vows. With their arms around each other, Evie and Darrel joined the standing crowd. After almost five decades of marriage, the Couches renewed their promises of lifelong love.

Sometimes the Couches wonder if going earlier to a Weekend to Remember would have helped Darrel recognize his PTSD sooner. They really don’t know. But Darrel says, “It would have helped us better understand a deeper husband-wife relationship and things to do to keep it there.”

Darrel and Evie say they are still applying the principles they learned at the getaway.  They regret the wasted years, but they don’t regret the choices they made to finally seek help—for his PTSD and for their marriage. “We just walked out of the Weekend to Remember like newlyweds,” Evie recalls. “It was amazing!”

After nearly 50 years of marriage, how many couples can say that?

Never Too Late to Ask for Help

Darrel and Evie Couch experienced years of turmoil in their marriage after he returned from the Vietnam War.

58: Investing for Life After Kids

with Greg Pettys June 21, 2021
We could spend 1/3 of our lives without a paycheck as we live longer now, which makes saving for later-life so important. Ron Deal talks with Greg Pettys about how to prepare for retirement while being mindful of your blended family dynamics.