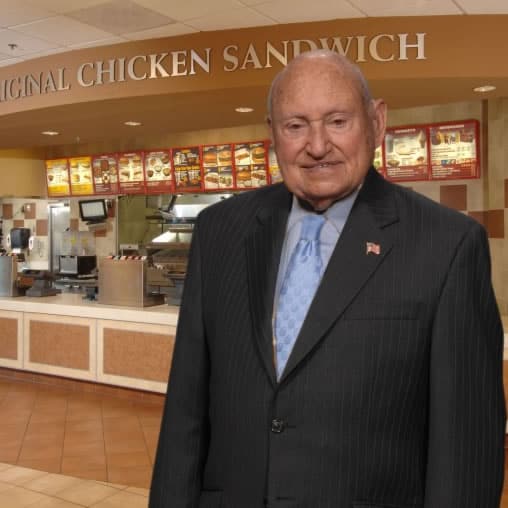 F
00:00
Chick-fil-A founder Truett Cathy has joined ranks with the saints in Heaven. Hear a clip from an interview FamilyLife Today did with him from 2005, along with some recent reflections from Truett's sons, Bubba and Dan Cathy.

Chick-fil-A founder Truett Cathy has joined ranks with the saints in Heaven. Hear a clip from an interview FamilyLife Today did with him from 2005, along with some recent reflections from Truett’s sons, Bubba and Dan Cathy.

Bob:  We’re listening back to a conversation we had 11 years ago with Truett Cathy.

Dennis:  Yes, just a lot of wisdom in that man’s life.

Bob:  And of course Truett went home to be with the Lord yesterday at 1:35 in the morning Atlanta time. For listeners who don’t know, he was the Founder and President of Chick-fil-A, but more important than that, he was first and foremost a dad, wasn’t he?

Dennis:  He was a dad and he was proud of his daughter and his boys and his grandchildren. He’d always show me pictures of them when he took me back in his office. He was just full of all kinds of common sense. One thing we scooted by just a little bit earlier, Bob, is that Chick-fil-A is closed on Sundays.

Dennis:  I’ll not tell you who, but I helped a very famous business man who runs a business that is open on Sunday, and he wanted to meet Truett Cathy. As we were flying back after he had met Truett, he goes, “How can I do that? I just don’t know if I can do that or not.” And I thought Truett Cathy never asked the question if he could. He just did. And he did it from the start.

It was one of the reasons why we encouraged our kids to get a job at Chick-fil-A, and five of the six, did because they are closed on Sunday. We wanted our kids with us on the Sabbath. We didn’t want them working. And we wanted them to learn not only a strong work ethic but how to truly serve the needs of customers.

Bob:  I mentioned earlier that when we were getting ready to shoot the video for the Stepping Up video series for men we were thinking of who we could show as a portrait of a patriarch and Truett Cathy was one of the names that came to mind. So I went down to Atlanta and I sat down with his two sons, with Dan and with Bubba, and I asked the two of them to share some reflections on what it was like growing up with Truett Cathy as their father.

We included that in the Stepping Up video series and if listeners would like to see the interview they can go to FamilyLifeToday.com.

We have the video posted on our website.  But we thought you ought to listen to what they shared during that interview.

Dennis:  You’re going to get a chuckle out of this story that is told as Bob interviews Dan and Bubba, because Truett was a man who believed in the discipline of his sons.

Dan:  Growing up with my dad was a lot of work. He got us very engaged at an early age and it really was a place that built a lot of our self esteem. We knew we were doing something that no other kid got to do.

Bubba:  He was always working so when he would get home from the restaurant business he would go straight outside to put up barbed wire, to hoe the garden, do bush hogging behind the tractor, and we would be usually trailing behind him, finding out--really we were learning a lesson about working hard.

Dan:  I always that felt he was very engaged as a dad. Tremendous role model for me and I often learn things from him that are parenting wise.  For instance when Bubba and I would fight in the back of the car oftentimes, I remember him pulling off the side of the interstate and making us run to the next exit.  And it soon got to the point where all he had to do when Bubba and I were fighting was just tap the breaks and there would be total peace.

Bubba:  Mom was very much a part of dad’s life. They’ve been married 63 years and she’s helped him in the store. She’s helped him sample Chick-fil-A across the country.  So Truett Cathy and work ethic was very strong, but he did have a day that he took off.  We knew that meant more to him than the business.

Dan:  He learned the concept of the Sabbath as it related to the need to have rest and that rest and that reflection--he could take a nap in just a flash of a moment. If you’ll just be consistent and acknowledge God in all your ways, even while you’re selling chicken, then He’ll direct your paths.

He’s been a Sunday school teacher, as you know, for well over 60 years teaching young 13- and 14-year-olds. Often he would have these boys who had made foolish choices and decisions would sit around this circular table in our kitchen. They were teenagers and here I am six, seven, eight, and nine years old, hearing these terrible stories about foolish choices and decisions.

He never talked about trying to change the world and grandiose times or grandiose words, ideas and so forth. He built very personal and deep meaningful relationships with single individuals.

There are a lot of employees when I started as a teenager having regular hours at our Dwarf House, that some of the employees would pull me to the side back in the kitchen and say, “Let me tell you what your dad did for me.”

I knew they had expressed thanks to him for money he may have extended to them or help with school books or tuition or maybe a tuxedo for a prom and so forth. It was almost as if they couldn’t thank him enough and they felt like they had to thank me. What an experience as a kid to hear people talk about your dad in such a wonderful way.

Much of our concept of God is formed by the relationship that we have with our dad.  That’s why I had such an incredible vision of who my heavenly Father was because I saw those kinds of expressions of appreciation and tremendous gratitude from people to my earthly father. It was really easy for me to project that my heavenly Father is incredible.

Bubba:  He’s been my role model and it’s wonderful to have a dad like that because he is the same at business, at church, and at home. I’ve been very blessed to have a father like that.

Dan:  While he’s been a great business leader, he’s been a great Sunday school teacher, I think his greatest legacy may be that he was an incredible husband, number one, and he was a tremendous father because the way he lived his life, a life of integrity--it indelibly impacted and infected my heart and my brother’s and my sister, Trudy’s. We hope to be an extension of his life.

Bob:  Well, and they have become just that, an extension of their father’s life as they now run the business but also as they raise their own kids and as they give back to their community.

Dennis:  They are. All three of them and their families are on mission. They are about the right stuff and if …mmm…

I’m a bit emotional because I knew Truett and I know what kind of family he left, but if we had more business guys like him, more business women, who left legacies of value like this and who cared about and loved people all the way to the end; I’m going to tell you something, Bob, this would be a different country to live in right now.

We need the next generation of Truett Cathys who, as one friend of mine said, who knows a little bit about business, who may have just built the best business in America.  Now not the biggest, but all things considered when you think about the value of a human being and loving people and providing a great product--it very well could be the best company in America.

I usually have them take them off.  But in honor of Truett I may have them keep the pickles on my sandwich.  And I hope our listeners, if you do go get a chicken sandwich this week, just say, “This one’s for Truett,” when you order the chicken sandwich.

Dennis:  I think that would be a good idea this week.

Bob:  Once again, if our listeners are interested in hearing the interview that we did with Lysa TerKeurst on her book called The Best Yet, you can find that online at FamilyLifeToday.com, and Lysa will be back with us again tomorrow. Hope you can tune in tomorrow as well.

I want to thank our engineer today, Keith Lynch, and our entire broadcast production team. On behalf of our host, Dennis Rainey, I'm Bob Lepine. We will see you back tomorrow for another edition of FamilyLife Today.

FamilyLife Today is a production of FamilyLife of Little Rock, Arkansas.

Help for today.  Hope for tomorrow.

We are so happy to provide these transcripts to you.  However, there is a cost to produce them for our website.  If you’ve benefited from the broadcast transcripts, would you consider donating today to help defray the costs?

After an Abortion: 5 Ways To Help a Friend Who’s Grieving

The emotional and spiritual pain after an abortion is overwhelming. Here are five ways to help a friend process.

Carolyn Lacey: How to See People

with Carolyn Lacey July 5, 2022
So few of us really "see" people, giving them our time and presence. Author Carolyn Lacey discusses welcoming non-Christians into our lives like God does.